Yesterday I completed co-presenting the three-part Ketchum webinar series on Tapping the Power of Mobile. The feedback was excellent, with record audiences of Ketchum clients and staff for the series. Here is an overview of the content we covered over the three webinars.

The final session was on Where Mobile is Going, which looked at the mobile industry landscape, as well as the implications of emerging technologies such as 4G and LTE, next generation augmented reality, NFC and mobile payments, new interfaces such as video glasses and pico projectors, mobile sensors, and far more.

I began by looking at the mobile operating system landscape, showing the forecasts recently made by Gartner, as below. 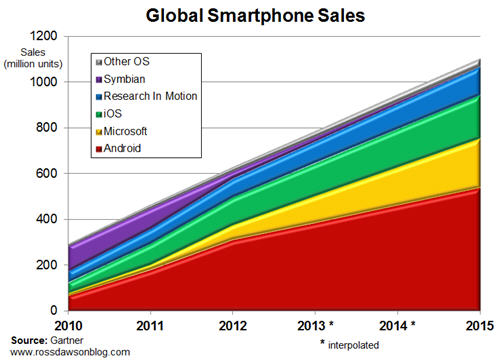 When the figures came out a few weeks ago I provided some initial thoughts on the risks to those mobile forecasts.

I would not make the same forecasts for a number of reasons, however Gartner’s figures are a reasonable stab at what mobile operating system shares might be. Given that starting point, here are a few summary notes on the critical uncertainties that could make these predictions wrong, from what I covered in the Tapping the Power of Mobile webinar.

* Impact of version fragmentation and incompatibility issues, including apps not running on all versions of Android

* Shift of app developers to Android and other platforms

* The rise of alternative music, video, and other content distribution platforms

UNCERTAINTIES: BLACKBERRY
* Success of the launch of its new QNX operating system, and patience of its customers until it is available on phones

* The success of its large investment in its PlayBook tablet

* Blackberry’s ability to gain market share in other countries as it loses ground in its dominant U.S. and U.K. markets

UNCERTAINTIES: OTHER
* The rise of independent hardware manufacturers could create new winners

Clearly these are just some of the most prominent uncertainties. What we can absolutely say is that this will be a highly unpredictable space, in what could be one of the highest value-creating industries in the world. Major twists and turns are likely to come monthly or even weekly. This will be a very exciting space to watch and be involved in.

What would you do if you could solve a major world problem with technology and... How tablets are changing how we use tech
Scroll to top
This website or its third-party tools use cookies to improve user experience and track affiliate sales. To learn more about why we need to use cookies, please refer to the Privacy Policy.