It’s an excellent report, bringing together contributions from leading researchers from Australia and globally, looking at the exceptional challenges of the changing landscape of work, and some of the policy prescriptions that will help nations and their citizens to prosper.

One of the highlights of the report was an analysis of the likelihood of automation replacing jobs in Australia, adapting the methodology used by the Oxford Martin Institute in examining the risk of job losses in the US.

The Australian study looked at the likelihood of different job sectors being replaced by automation. 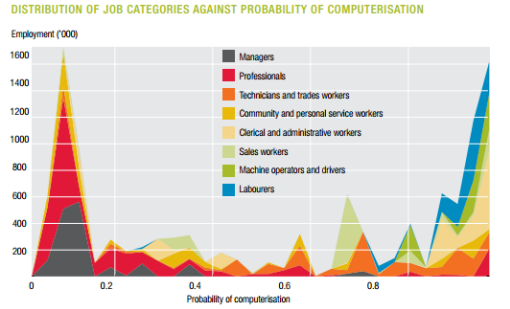 40 per cent of current jobs have a high probability (greater than 0.7) of being computerised or automated in the next 10 to 15 years. This is a lower figure than that for the US (50 per cent) – we believe due to smaller numbers of workers in the service sector – and is comparable to the UK.

The study went on to look at the geographical distribution of potential job losses, extending on the methodology of the original report. 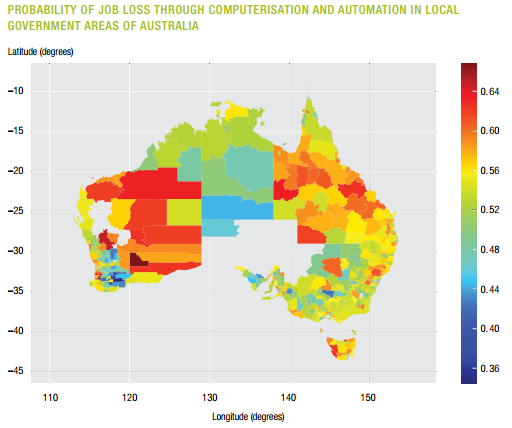 The report notes that in fact physical labor and machinery operation have a high chance of being automated, meaning that in fact highly physical industries such as mining will significantly disrupted.

Regions with high dependence on mining (Western Australia and Queensland in particular) will suffer a bigger impact from automation and computerisation. 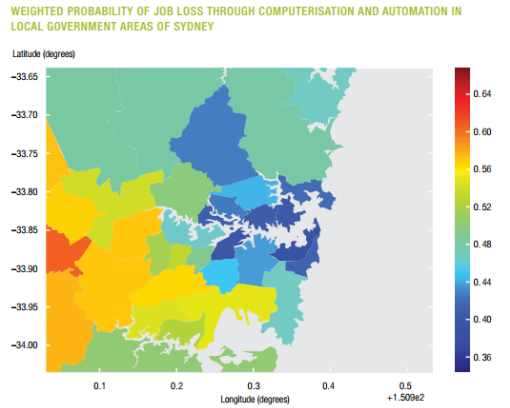 Within cities such as Sydney, shown above, the knowledge-intensive inner city will be least affected, while the edges of the city are likely to be more affected. The authors say:

These… simply underline many of the messages in the national data: The jobs that will remain will most likely be those in professional, technical and creative areas.

it is critically important to convey to policy makers the degree of potential impact of the automation of jobs. However digging deeper to look at specifically what kinds of jobs are at risk, and the regions and even suburbs that will be most affected, start to provide real insight into the policies and actions that need to happen now to mitigate risks and seize opportunities.

Tech dangers: Will smart clothes make us obsessive about weight? Jobs of the future: sports referees out, emotional designers in
Scroll to top
This website or its third-party tools use cookies to improve user experience and track affiliate sales. To learn more about why we need to use cookies, please refer to the Privacy Policy.