The event kickoff brought together three featured speakers – physicist and futurist Michio Kaku, trend watcher Daniel Levine, and myself – who each delivered a keynote and then joined a panel discussion. 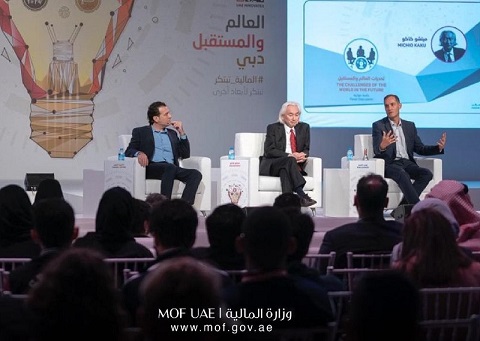 My keynote was on The Future of Finance. In my session I addressed a number of key issues, including the rise of distributed economies and finance, the evolution of ‘post-capitalism’, and the emerging future of work.

One of the key themes of my keynote was the continued development of more efficient capital markets.

There are over $140 trillion in investable assets in the world seeking risk-balanced returns in cash, debt, equities, real estate and now a widening range of ‘alternative’ asset classes.

The possible real value of that capital is immense if it is applied efficiently to those ventures that have the highest potential, both in financial returns and in social value.

The most important single enabler of more efficient capital allocation is transparency. The more information we have on the ventures we invest in, the better investment choices can be made.

A central part of this is in having information on non-financial measures. The most important clues to potential value creation usually come not from financial reports, but other information that give insights into issues such as customer engagement, innovation, organisational renewal, and culture.

This will help drive a gradual disaggregation of corporate reporting, where instead of highly aggregated financial reporting that hides much of the most important information far greater detail becomes available. This will spur new forms of analysis, sometimes AI-driven, that support better investment decisions.

In addition, the investment climate is shifting to increasingly take into account what economists describe as ‘externalities’: factors that are outside an organization’s financial consideration or reporting, including environment and social impact.

Last year six of the world’s largest sovereign wealth funds with aggregate assets of $3 trillion stated they would only invest in companies that incorporated climate risk issues in their decision-making. We are still relatively early in a shift in investment decisions that account for factors outside traditional financial reports.

The demand from investors for this kind of information will drive innovation in accounting and non-financial reporting, and heightened attention to non-financial impacts outside the corporate entity.

The future of governments and society

The concept of ‘government as platform‘ suggests that governments should be enablers of social value creation, rather than focused on spending taxpayer money in direct service delivery, often inefficiently. Governments too allocate capital, and there is vast scope for improvement in how they do that.

In order to shift to being platform enablers governments need to be able to measure social value. Social impact bonds are an example of structures that draw directly on social impact data to price financial vehicles, often enabling NGOs to achieve social outcomes far more efficiently and effectively than governments can.

Better capital markets at the heart of our future

I am actively exploring the rich topic of ‘post-capitalism’ in how we address the flaws of capitalism as we know it (more on that in another post). However capital will always exist in some form, and the vast wealth of the world will continue to seek to create value, increasingly social as well as financial.

The possibility of a better future world will necessarily be founded on more efficient capital markets, founded on transparency and information flows, that are focused on wealth creation in the broadest possible sense.

The end-game of AI-based assistants is becoming everyone’s assistant for...

Exploring the Future Ep8: Platform strategy as enabling ecosystems
Scroll to top
This website or its third-party tools use cookies to improve user experience and track affiliate sales. To learn more about why we need to use cookies, please refer to the Privacy Policy.