My colleague and friend Richard Watson and I have created a number of visual frameworks together, including Trend Blend 2007+ based on the London tube map, which has spawned many imitators over the years.

Since Richard has moved back to London we’ve collaborated less on frameworks, however Richard has continued to do some marvellous work.

Here is the Timeline of Emerging Science and Technology, created by Richard’s What’s Next in collaboration with Imperial College Tech Foresight. 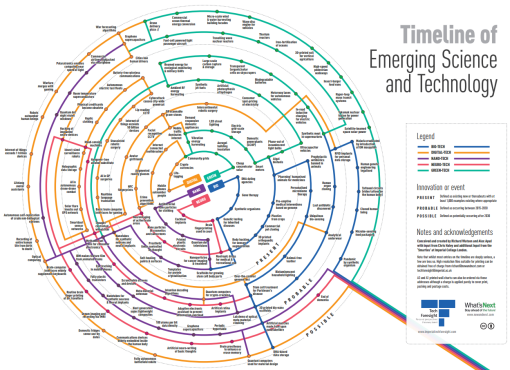 Click on the image to view the full-size pdf.

The timeline needs careful study, it is not for quick scanning, do spend some time with it.

It’s also well worth seeing Richard’s post describing how the visual was generated, including the full design process.

Here is a small selection of the emerging technologies mentioned in the visual:

Flying cars are here! Will they become mainstream? Envisioning the future of government as solution enabler
Scroll to top
This website or its third-party tools use cookies to improve user experience and track affiliate sales. To learn more about why we need to use cookies, please refer to the Privacy Policy.