While recently re-reading some of my personal journals from my late teens and early twenties, I found a list of thoughts distilled from my writings over several years, categorized into the primary themes I was thinking about, such as ‘Experiencing’, ‘Independence’ and ‘Creation’.

One of these phrases was ‘The only thing you can change… is the future’.

It struck me as immensely apt to my work today, so I put it in a shareable image, shown below. 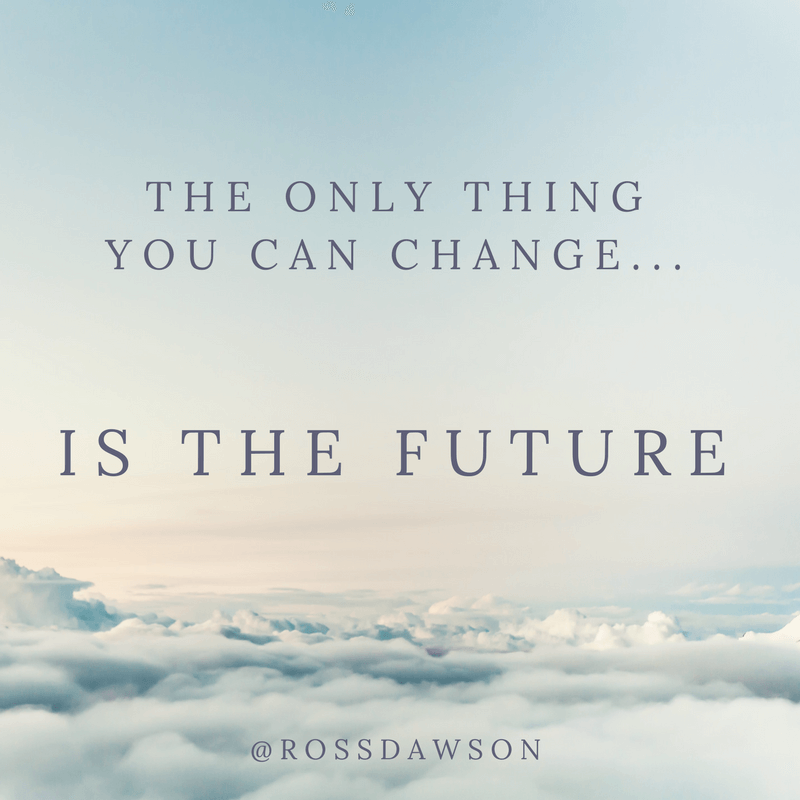 In this format sounds like a general observation, though absolutely true.

Caught in the past

Humans all too often get caught in the past.

For example, ‘sunk cost fallacy‘ is a very dangerous but pervasive cognitive bias, which leads people to continue putting effort, resources or money into projects or investments because they don’t want to give up on what they have already put in.

What has happened in our past is (largely) irrelevant. It doesn’t tell us who we are or what we are capable of.

What has happened has happened, and we can’t change it. But we can change how we think about it. And the value of that is that it helps us to avoid making the same mistakes, repeating the same patterns, and to do things differently so our future is in fact something we can shape.

Focusing on what we can change

As individuals we need to be focusing on our future rather than giving undue import to the past, and on what we can do to make that malleable future what we want it to be.

Collectively it is far harder, because we have different visions for what we want the future to be. This is why we need to build coalitions of those who think along similar lines, so that we can align our thinking and action on a common vision that catalyzes action.

There is only one thing we can change: the future. We just need to realize it.

In the age of AI, relationship scope will drive value in professional servi...

Periodic Table of Disruptive Technologies and Innovation
Scroll to top
This website or its third-party tools use cookies to improve user experience and track affiliate sales. To learn more about why we need to use cookies, please refer to the Privacy Policy.