The economic fortunes of public relations agencies are typically subjected to the economic swings of national and global economies. So one would think that the last several years that have marked an uptick from the downturn of the Great Recession would have most, if not all, of the large global agencies doing quite well economically. But a look at the revenue numbers of the top 10 global PR firms indicates otherwise.

In the chart below, you’ll see the billings for these firms over the four-year period from mid-2010 to mid-2014. Brunswick and Edelman are independent, but the rest are owned by the big global media holding companies. Weber Shandwick and Golin are owned by Interpublic; Ketchum and Fleishman Hillard belong to Omnicom; Burson, Hill & Knowlton and Ogilvy are with WPP; and MSL Group is owned by Publicis. The combined billings of these top 10 global agencies is $4.78 billion — a pretty significant number considering it’s generated by just ten firms. But dig deeper and the numbers become more telling. 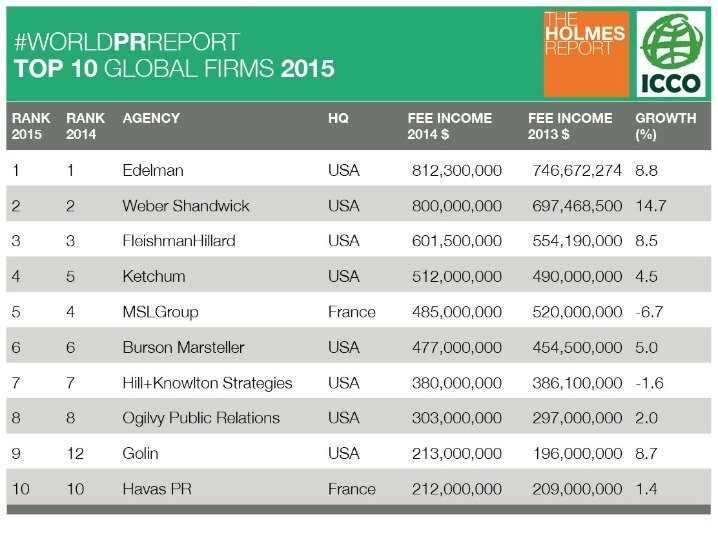 Here are some specific data points worth noting:

What’s interesting about this information is what it reveals about the media holding companies relative to the PR agencies they own. While they all own multiple agencies engaged in everything from PR to advertising to digital, their ability to run growing global PR firms could be seen as questionable – particularly WPP. Consider that the three agencies on the list owned by them have been experiencing extended periods of mostly stagnant growth, while other agencies owned by the other holding companies (MSL Group excluded) have been able to grow or hold their own with the economic upturn. Edelman is the outlier, not only in its growth but in its ability to grow substantially more than any single or even group of agencies other than Weber Shandwick.

But WPP is the largest media holding company in the world and the others aren’t far behind. So what’s going on here?

To get a better sense of how these companies perform economically, let’s take a look at how their stock price did during a similar period. In this case August 23, 2010 to June 30, 2014

Most of these organizations were doubling their share valuation at a time when their PR agencies were experiencing modest to stagnant growth or declining. If their stock growth was tied to PR earnings alone, most of these would have been listed as DO NOT BUY or SELL.

The combination of revenue and share price points to a number of things:

What will be interesting is to look at the numbers four to five years from now and see if these trends have continued. More than likely one or more of these agencies will be subsumed into another to cut costs, reduce redundancy and make the parent entity more relevant. There are a number of other factors at work that could impact this scenario, but given that media holding companies are publicly traded, shareholder expectations may eventually drive the future of the agencies that can’t make their way up the revenue chart.

From Key Messages to Keywords: PR needs to get with the program 6 key insights into the flow of innovation: Creating value in an open world
Scroll to top
This website or its third-party tools use cookies to improve user experience and track affiliate sales. To learn more about why we need to use cookies, please refer to the Privacy Policy.