Last night I was privileged to see in the New Year at the harbour-side broadwalk of the Sydney Opera House, at the Lord Mayor Clover Moore‘s party.

Personally, it was probably the best New Year’s Eve that I’ve ever had, not least because it was an absolutely fantastic party.

I wish I could do justice to the evening with an in-depth review, not least of the extraordinary fireworks and spectacle master-minded by designer Marc Newson, whose work I wrote about last year. Below is a brief excerpt of the display.

The video only gives a tiny inkling of what it was like to be right in front of the Harbour bridge in the midst of the fireworks. It was an absolutely extraordinary experience, with deep, powerful music around us, ever-changing visuals on the Harbour bridge, and massive fireworks all around, preceded and followed by great performances on the main stage.

It is fascinating that we have used fireworks for millenia, and still today fireworks provide the biggest spectacle that we can create. As Aldous Huxley wrote in the afterword in ‘The Devils of Loudun’, fireworks are a primary mechanism for our transcendence.

Today we have awesome other visual capabilities through projections, LEDs, and other devices, but we require a canvas for those. The Sydney Harbour Bridge provides that, and was an amazing centerpiece of the spectacle.

Newson’s over-arching design concepts were evident through every aspect of the festivity, with at the center a four-color rainbow that he described as “violet to represent community, peace, social stability and connectedness; blue to symbolise the harbour, sky and future aspirations; green for the environment, nurturing and growing; and yellow, which epitomises optimism, happiness and a sunny attitude.”

However beyond the visual and auditory extravagance, what really made the party was the people who were there. Clover Moore expresses Sydney so well, not least in her inclusivity. It was not a party of elites, but of all sorts of diverse people who are making a difference in Sydney, including many people who are catalyzing local communities, on issues ranging from cycling through to animal welfare. 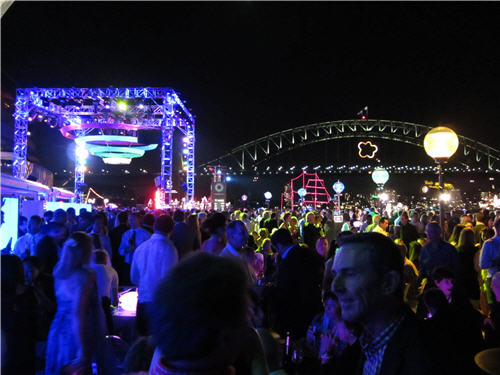 My wife Victoria Buckley and I met some extraordinary people during the evening. The whole evening was a grand experience, centered on the wonderful and extremely diverse people there.

While my New Year’s was personally a wonderful experience, it was great to have that aligned with the dawn of 2012, which I have said will be a time of transformation (and not apocalypse). To my taste, there is no question that Sydney is the best city on the planet. The way in which New Year was celebrated shows a taste of the spirit that drives the extraordinary city that is Sydney.

Today show: Social media and technology trends for 2012 Top 10 posts on the future of media
Scroll to top
This website or its third-party tools use cookies to improve user experience and track affiliate sales. To learn more about why we need to use cookies, please refer to the Privacy Policy.