COVID-19 has shifted most organizations in the developed world to predominantly virtual work.

The question is what happens from here.

Of course there many unknowns around how long it takes to resume work practices similar to 2019 and before, the timeline for a potential vaccine or other measures that may support that return, or indeed whether we will ever see the complete easing of today’s social distancing.

Many organizations are explicitly or implicitly waiting for a return to ‘normal’ workplaces, in the meantime doing the best they can while most of their employees are forced to work from home.

However an increasing number of organizations are clearly stating that they expect never to return to work as it was before. 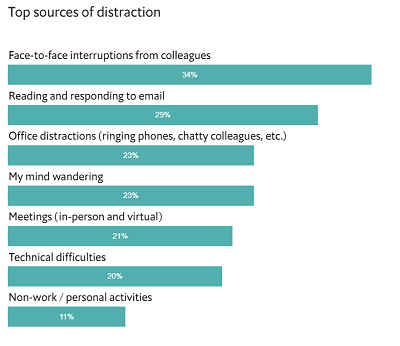 Source: In search of lost focus

Dropbox points to an interesting study they commissioned from Economist Intelligence Unit on focus and attention, contrasting remote and office work.

Dropbox recognizes that there is still value in meeting face-to-face and will set up ‘Dropbox Studios’ in its major employee centers of San Francisco, Seattle, Austin and Dublin.

Some companies such as Automattic, Toptal and Gitlab have over 1,000 staff and have no offices, just regular gatherings and sometimes places for team members to meet.

They have been notable exceptions to the usual approach to business, but their ranks are beginning to swell.

‘Virtual first’ is a useful phrase, as it means that is not the only mode of work, simply the default or primary one.

Rather than hoping or trying to resume ‘office first’ work and making do with the realities of remote work structures in the meantime, these companies are recognizing the trends and realities, and making the most of these shifts.

From this early vanguard, expect to see many other companies over time adopt ‘virtual first’-style practices that also use physical workplaces as an important element in creating high-performance teams and organizations.

Designing future organizations based on ethical foundations for AI

Why we must have faith in humanity, now more than ever
Scroll to top
This website or its third-party tools use cookies to improve user experience and track affiliate sales. To learn more about why we need to use cookies, please refer to the Privacy Policy.