The iPad has changed my life. It feels like I have been waiting for it since I became conscious.

However the iPad alone doesn’t do the job. It is the iPad together with a wireless keyboard that has transformed my life. 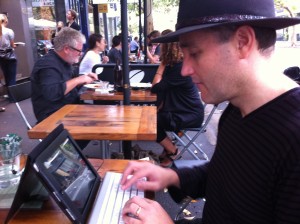 Two years ago tomorrow I wrote a blog post saying It is totally INSANE that you cannot use an external keyboard on an iPhone. For some completely inane reason Apple crippled the Bluetooth on the iPhone so it couldn’t be used for external keyboards.

I was thus delighted when they announced a little over a year later that they would allow the use of external keyboards in iOS 3.0. However as it happened the iPad was released before the new OS came out, transcending the need for an external keyboard on the iPhone.

The iPad with keyboard allows me to do just about anything I would do on a laptop, or for that matter on paper. With cloud tools such as Gmail and Dropbox set up correctly, I can access and do all of my work from anywhere.

Now let’s get back to the two REAL reasons why the iPad is transformative and a completely different class of device to a laptop.

Instant on. A work device must be immediately available. Taking minutes to be able to use something is antediluvian – it’s plain crazy to have to put up with that.

Long battery life. Anything that doesn’t have sufficient battery life for a US-Australia flight or a full working day from breakfast to late evening is just not good enough.

Which gets us to the comparison with paper. When I used to carry around a paper workbook in pre-iPad days some used to ask me why I, as a technology evangelist, didn’t use a computer.

The answer at the time: paper is far superior to the current technologies on the critical factors of boot-up time and not requiring power. With the iPad (and to be fair, a whole new class of other tablets), that has changed.

I carry my iPad with keyboard pretty much everywhere. The cover I have encloses the keyboard, so it’s the same as carrying around just the iPad. While folding keyboards are available, the basic keyboard is fine.

One of the wonderful things is that with a wireless keyboard I can prop up the screen wherever convenient, and place the keyboard on my lap. This means I can use it anywhere. In taxis, on trains, in economy class seats with the person in front of me reclining, pretty much wherever I am sitting. 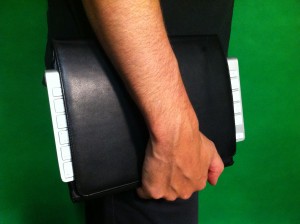 I have frequently used this setup to live blog when I am speaking on a panel. Sitting on a bar stool, I can put the iPad and keyboard on my knees and comfortably write notes.

Awesome stuff. Which makes me amazed, flabbergasted, blown away, staggered, that I have NEVER seen anyone else do this.

I have seen people use an iPad dock with keyboard in the office, which isn’t the same thing. I have heard that there are others who use an external keyboard with the iPad on the move, and obviously I’m not the only one. But almost everyone seems happy to use the on-screen keyboard.

When you buy an iPad in the Apple online store it presents you with the option of buying a wireless keyboard. Either people don’t buy them or they don’t use them. Very, very weird.

Anyway, I’m happy. I now have a package which has transformed my life: iPad, wireless keyboard, and all my work in the cloud.

I’ll write another time on the apps and tools I use to do this.

Japan’s nuclear crisis could be foreseen – a view from 19 years... 5 recommendations for successfully implementing distributed innovation and shared...
Scroll to top
This website or its third-party tools use cookies to improve user experience and track affiliate sales. To learn more about why we need to use cookies, please refer to the Privacy Policy.