When we first released our Social Media Strategy Framework, the response was so strong that it ended up being translated into 12 languages.

At the time we did want to translate it into Arabic, however this proved difficult as it requires the Middle East version of Illustrator; most versions of Adobe CS do not support Arabic text. Fortunately we were recently approached with an offer to do a translation into Arabic, supported by the NGO Internews.

When I recently did the keynote at Arab Media World in Dubai on Creating the Future of Arab Media I noted that one of the defining aspects of Arab media is the exceptional uptake of social media in a number of Arab countries, by some measures the highest in the world.

As such the social media familiarity gap between users on the one hand and companies and governments on the other is extremely high. Hopefully this framework will prove useful. As always feel free to pass on the framework to those who might find it useful.

Click on the framework image to see the full pdf. 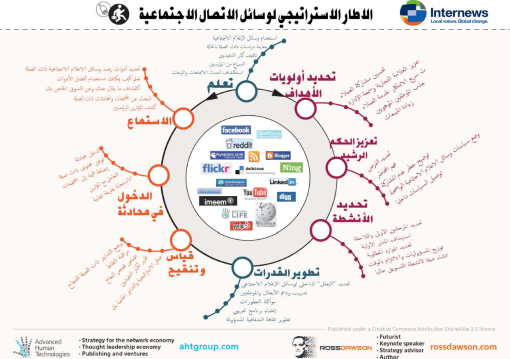 Report: The Future of Back-to-School The new layer of the economy enabled by M2M payments in the Internet of Thi...
Scroll to top
This website or its third-party tools use cookies to improve user experience and track affiliate sales. To learn more about why we need to use cookies, please refer to the Privacy Policy.