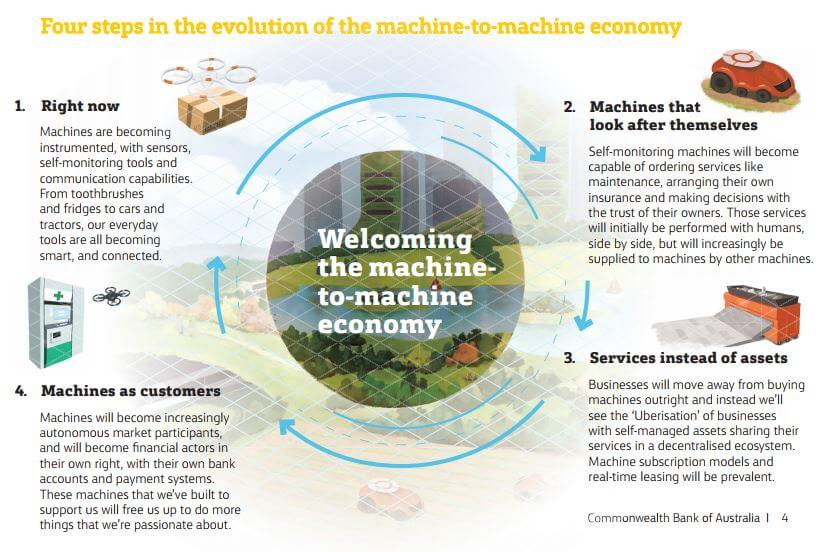 A few years ago I wrote The new layer of the economy enabled by M2M payments in the Internet of Things, envisaging the potential of machine-to-machine payments.

I described how micro-payments between machines could lead to far greater efficiencies as for example cars, drones, or farms negotiated directly with each other to achieve their objectives without the necessity for human involvement. I noted that the cost efficiency of crypto-currency payments made them a strong contender for a platform for the M2M economy.

Commonwealth Bank is one of the banks globally pushing forward in the space as these ideas move from the future into the present. The report notes:

Our research has confirmed that many high value physical assets in business are significantly under-utilised. A key observation is that the different and complementary capabilities of various machines will inevitably lead to a market for machines to share services with one another.

To date, our research has identified over 20 potential use cases for machine-to-machine economy experimentation. The implications could be especially significant for sectors including manufacturing, logistics, resources, agriculture, energy and infrastructure.

We are currently working with our partners and customers to understand how banks can provide value added services to smart machines by leveraging Internet of Things data and automating processes and marketplaces using blockchain-enabled smart contracts.

There are many implications to be explored before this goes mainstream. This includes governance and ethical considerations:

In the short term, it’s easy to envisage smart contracts with built-in guardrails embodying essential regulatory and business rules – from reporting requirements to transaction value limits. But as artificial intelligence (AI) begins to arrive at scale, the question is whether these mechanisms will be enough. That’s why it’s important for intelligent machines to learn about regulation and socially responsible behaviour, as well as about business. In the same way as we educate our children to follow social norms, we need to ensure our machines are not only smart, but ethical.

Another key issue is that as independent systems negotiate with each other there can be highly undesirable unintended consequences.

In the 1990s I closely followed the work of Pattie Maes and her MIT Software Agents group, which researched the possibilities and implications of an agent-based economy. Much of the research of the MIT team and their peers is only now becoming relevant as independent, relatively intelligent software agents are on the threshold of building a substantial non-human economy.

We now need to investigate and understand how that autonomous economy may actually work. The potential for economic and resource efficiency is enormous, but we need to be aware that autonomous multi-agent systems just might run amok.

“Inspiring and terrifying” perspectives on leadership for the future...

A practical strategy framework to drive useful action and high performance
Scroll to top
This website or its third-party tools use cookies to improve user experience and track affiliate sales. To learn more about why we need to use cookies, please refer to the Privacy Policy.