When did you last say or hear someone say “what a small world”? People have an unquenchable fascination with how richly we are connected, never ceasing to be amazed by the seeming coincidences of how one friend knows another through a completely different route. Yes, it is a small world, and growing smaller all the time. The well-known phrase “six degrees of separation” suggests that we are connected to every person on the planet by no more than six steps.

After explaining the concept, its origin, and how ‘small world theory’ is helping us to understand the nature of social networks, I continued:

From six degrees, we are moving closer to four degrees of separation from anyone on in the world, with the possible exception of a few isolated tribespeople. We live embedded in an intensely connected world.

That prediction is being borne out today. A paper just submitted to arXiv titled Four Degrees of Separation, says that a study of the entire network of 721 million Facebook users with 69 billion relationship links shows an average distance of 4.74 degrees of separation. 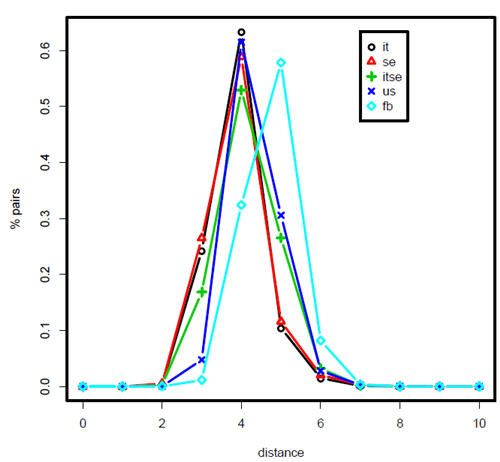 As the New York Times wrote about the research, one of the things that has changed over recent years is the definition a friend.

Perhaps more importantly, the issue is who we can connect with. The original study was about who you were able to communicate with, primarily by mail. Recently we have accumulated a plethora of channels to communicate with people we have encountered and are easily able to keep in touch with, as well to gain acquaintances of even ‘friends’ who we may have never have met, but we know something about and can communicate with.

While we will never reach three degrees of separation for all of humanity, many of us can effectively experience that most are within three degrees or a fraction more. The world has shrunk a massive amount, and it will shrink more.

Tear the walls down: Jericho and the future of enterprise tech Next year your entire desk will be a computer control device
Scroll to top
This website or its third-party tools use cookies to improve user experience and track affiliate sales. To learn more about why we need to use cookies, please refer to the Privacy Policy.