Marc has had a powerful impact on many facets of design. His 1986 Lockheed lounge (one of which most recently sold for $2.1 million) and the 1988 Embryo chair were early landmarks in his career. Initially working in furniture, he has now designed cars, boats, bicycles, cookware, Nike shoes, executive jets, and across many, many other domains. He is Royal Designer for Industry in the UK. 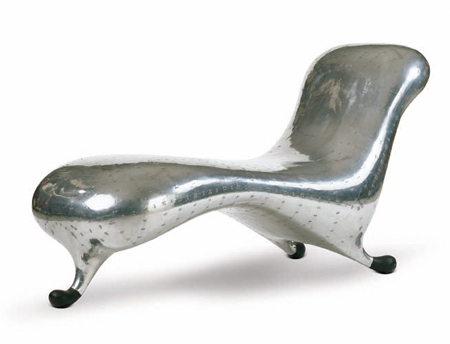 A particular favorite of mine of his work is the Qantas first class lounge in Sydney, which is the nicest airport lounge I’ve been in anywhere.

Marc has recently been named the Creative Designer for this year’s Sydney New Year’s Eve fireworks, as part of communication company Imagination’s winning bid. We are promised that the fireworks are going to be absolutely awesome, and even given what they have to live up to from past years, I’m sure they will be.

Sydney Lord Mayor Clover Moore said that the Design Excellence Forums are intended to help take Sydney to the next level in design excellence. She sees design as integral to everything done by the city of Sydney, and that it can be a source of inspiration. It is fabulous to see a mayor with such design awareness.

SBS Insight’s Jenny Brockie interviewed Marc on stage. Here are a few of the things Marc talked about.

Designers are supposed to span disciplines. There are the same issues in designing a watch or an airplane.

Many corporations are finding that they can use design to express themselves.

In his role as creative director at Qantas Marc desgined absolutely everything you see in Qantas’s A380, from forks and menus through to seats and lighting. Qantas has identified design as a way of differentiating itself.

As a designer, he finds it marvellous to have the unparalleled access to materials that you have in the airline industry. He can use amazing materials that are not accessible in many other industries.

He sees himself as a gun for hire, brought in to solve problems.

Asked whether as a gun for hire, he would design a gun, he revealed he is also a designer for Beretta, the oldest registered company in the world, designing sports guns.

It’s hard to be original. Bringing new materials into industries is a way to do that. When Marc designed shoes for Nike (for among others Russian cosmonauts), as well as bags for Samsonite, he was able to take what he had learned in each domain and apply it to the other.

The Atmos clock runs on temperature differentials, so it never needs energy. Marc helped reinvent the product, working with 85 year old technology and a long-established organization. It was a problem solving exercise, breaking it down and putting it back together

Designing New Year’s Eve is a challenge. You can control fireworks quite well, in terms of shape, color, and timing. There are 40 people in charge of 11,000 fireworks. There are no rehearsals, and it is even difficult to do digital simulations of fireworks, so it is a different adventure.

As a child Marc wanted to create. But there wasn’t a design industry in Australia, so he had to do it himself. He said Sydney values design, and that not many other cities do. Australian design is not distinctive, it’s international. Design suits Sydney as a domain.

Sustainability is a prime focus for design. Designers have a unique opportunity to advocate doing things in a sustainable way. One of the best ways is to design objects that people keep, pass on to others, and that don’t become landfill. I want to design things that have longevity. Disposabiliy isn’t good, objects should last a lifetime.

It’s harder now to find time to do all the things he does. He does all the design, and uses technicians rather than a team of designers, which is different from the approach of many other design houses.

Industrial design is a process that allows you to iterate and perfect things before you manufacture.

He thinks the state of contemporary car design is very poor. He only owns vintage cars and he struggles to find any he likes on the market today. He says car design today is terrible. People’s opinions are only informed by what is currently on the market. Marc designed a car for Ford that never went into production, and he is keen to design a car that will be produced.

He acknowledges Barcelona as a benchmark for urban design, and also mentions Copenhagen.

In question time I asked him about his design process.

He said the design process as applied to one object or another is exactly the same. The syntax is the same. Other things change. The brief can be very different from one job to another. Materials and scale change. But there are enormous similarities across design domains.

“I still design things in my head, and then draw in a sketchbook. I’m old school in that way. No computer is as responsive as what I can do in my head.

My sketchbook is a visual diary. It’s a way of recording ideas, a visual record. I can take that and extrapolate it out with the help of computers and sophisticated 3D software.”

During the evening there were a number of allusions by Jenny and the audience to public transport. Marc said he would be delighted to work on that kind of project. I have to say it would be absolutely awesome to have a public transport system designed by someone of the calibre of Marc. That would make a massive difference to the city as a whole and people’s experience.

It was a great event, particularly tapping into Marc’s insights into how design is a common process across domains. With design increasingly central to everything, applying design thinking across different spaces is going to be central to how we create better lives for ourselves. Developing that as a true boundary-spanning discipline will be a massive help.

[UPDATE:] A vodcast of the entire event is now available.