I am at the launch of Digital Sydney, part of the Vivid Sydney and Creative Sydney festivals.

The reality is that for much of the last decade and more, the New South Wales government has been among the least supportive of the Australia states for the digital and creative industries, with in contrast Victoria, Queensland, and Tasmania in particular having considerably better developed initiatives to support these industries.

Fortunately that has changed significantly over the last few years, with gradually increasing state government support for the digital sector, and with the freshly-elected government giving every indication of taking it yet further. Given the blindingly obvious importance of the digital and creative sectors today, as well as Sydney’s growing success in the space, there seems to be a good chance that the government support will develop rather retreat from here.

Certainly over the last 2-3 years the Sydney tech entrepreneur space has soared, making it arguably now in the top dozen tech startup cities in the world, or close to it. So far that growth has owed very little to government support. However if significantly greater support kicks in at this level, it could help Sydney consolidate and build on its strengths as a startup center. Government support is certainly not necessary. But given Sydney is coming from behind, initiatives that are well designed and executed can be a massive help.

The Digital Sydney initiative has multiple objectives, including promoting investment into Sydney and branding Sydney as an Asia Pacific center of excellence for digital talent and work.

I blogged earlier about the Digital Sydney’s crowdsourcing of its visual identity. The winner of the $10,000 prize, announced tonight, is Surry Hills-based Ascender Design. The brand shows a waving multi-colored ribbon, which you can see in the video above and at the top of the Digital Sydney website.

The bulk of the evening consisted of a series of speakers telling local success stories from the sector, providing lessons and inspiration for the community.

Alan Noble, head of engineering for Google, gave a big picture perspective on how the Internet is changing the world . He mentioned that in a global BBC survey showed that Australians are among the most supportive of the idea that access to the Internet is a basic human right, with 85% agreeing.

Dean McEvoy, founder of Spreets, spoke about the success of Spreets, founded in February of last year and sold to Yahoo!7 less than a year later for A$40 million. He said that startups can’t look at trends as reported in the media because by the time you see them it’s too late. The only way to identify the problems you need to solve is to be close to those issues. Dean’s first business was a bar, which led him to founding Booking Angel (which we named in the top 10 Web 2.0 apps in BRW in 2007), and in turn to see the opportunity that led to Spreets.

When Dean moved to Silicon Valley he found a very different attitude to failure than in Australia. He found that venture capitalists were interested in what entrepreneurs had learned from their experience, rather than being turned off by failure. When Dean was explaining the challenges of Booking Angel to a VC, the VC mentioned a company he had invested in, that happened to be called GroupOn (later named by Forbes as the fastest growing company ever). He recognized that it would be a great opportunity for Australia, came back to Sydney, teamed up with Pollenizer, raised money, and sold.

He said that (until recently) building a startup in Australia is like growing a plant in a dark cupboard. There hasn’t been the sunlight and nutrients to grow tech companies, but when they get them they can grow fast. He hopes that we will get the local insights and energy that will support the entrepreneurial scene from inside Australia.

Oliver Palmer, head of innovation of leading web and mobile developer TigerSpike, spoke about the company’s journey from being founded in 2003 to 120 people across offices in Sydney, London, and New York for clients including The Economist, The Daily Telegraph, and Time Out, with no external investment along the way.

Mick Liubinskas of Pollenizer spoke about the merits of failure. When Pollenizer was founded they wanted to help build more successful startups in Australia. With $1000 in investment, Pollenizer has launched 25 companies, with 50 people working for them across Australia, Europe, and India. Pollenizer is a serial co-founder, working with founders across all 25 companies, and in addition to Spreets, a number of significant successes. Their approach it to find ways to fail, in order to build successes. Pollenizer is seeking to build up a sub-culture of failure, getting started, trying, learning, and succeeding. Mick said there is a sufficiently large market in Australia now, and there is a second wave of Australian entrepreneurs who have done ventures overseas and have come back to help build the local community. 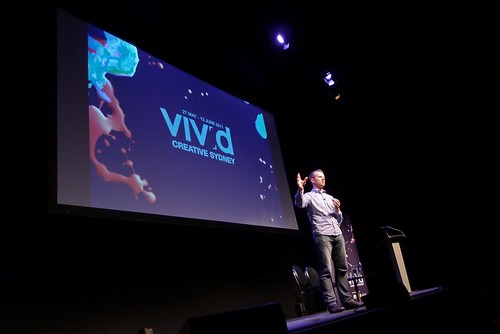 Paul Butterworth and Jason Bath of visual effects company Fuel spoke about how they have innovated on the path of growing their company. Over the last 10 years they have grown to 100 employees, with their work now being featured in movies such as Thor.

Unfortunately I wasn’t able to stay for the second session of the evening, which focused on startups in Sydney. Suffice to say there is an immense amount happening. The best city in the world to live in is rapidly becoming one of the better ones in which to start up a digital company.

SkyNews interview on future of tech: Cloud, Privacy, Big data, Reputation, Death... Awesome 3D visual mapping on Sydney Opera House
Scroll to top
This website or its third-party tools use cookies to improve user experience and track affiliate sales. To learn more about why we need to use cookies, please refer to the Privacy Policy.