A couple of analogies from Physorg illustrate these amounts:

* 9.57 zettabytes is equivalent of a 5.6-billion-mile-high stack of books from Earth to Neptune and back to Earth, repeated about 20 times a year.

* By 2024 the world’s enterprise servers will annually process the digital equivalent of a stack of books extending more than 4.37 light-years to Alpha Centauri, our closest neighboring star system.

This is 12GB of information daily per worker, or 3TB per year. Another study showed that American households consumed 3.6 zettabytes of information in 2008, or around 10TB per individual. (Note that not all of the 3.18 billion workers covered in this study work in information-intensive industries or countries.) 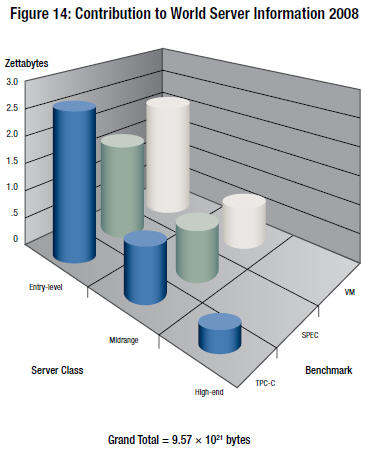 As shown in the diagram, two-thirds of the total information processing is done by “entry-level” servers costing $25,000 or less.

Of course this information is now well out of date. The study showed that server performance doubled every two years, with most of the performance improvement coming from low-end servers, though that doesn’t mean that information processing increases at that pace.

However what is interesting is that this study, in contrast to a number of other prominent studies on the amount of information in the world, focuses on flows of information rather than storage. This is in many ways a more interesting statistic.

Risks to Gartner’s smartphone forecasts: will Microsoft beat Apple, Nokia... SEC opens the gates to crowdfunding and a new structure of capitalism
Scroll to top
This website or its third-party tools use cookies to improve user experience and track affiliate sales. To learn more about why we need to use cookies, please refer to the Privacy Policy.