Global population growth reached its peak of 2.09% in 1968 and has steadily declined since then to its current levels of 1.08%.

The United Nations forecasts that in 2050 the growth rate will have slowed further to around 0.3% to give a global population of 9.7 billion, however its 80% probability range of forecasts includes the possibility that world population will be shrinking, a scenario I think is more likely than suggested by the UN forecasts.

The information visualization below shows just part of that picture, looking at the population trajectories of the top 10 most populous nations in 2050. Detailed discussion of the most interesting features of this are below the visual. 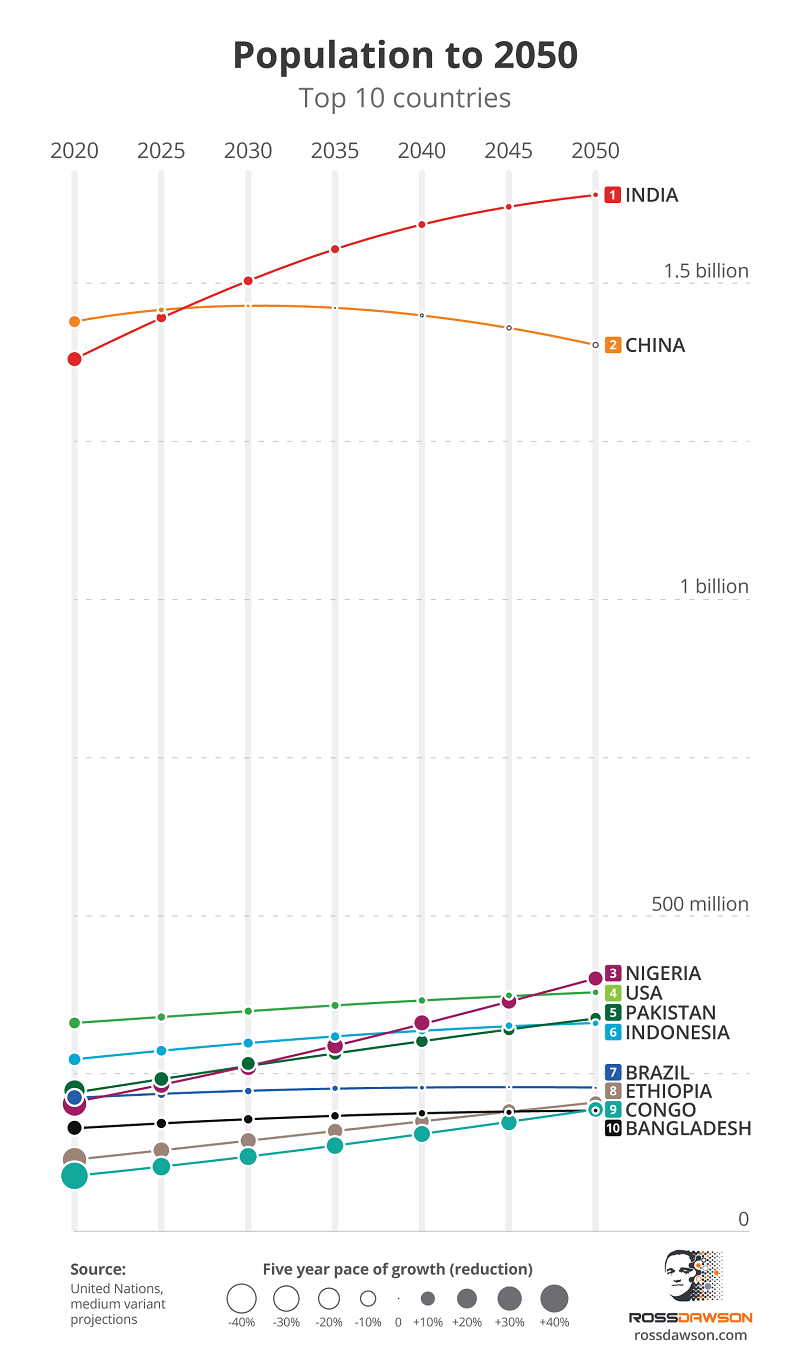 Features of note include:

India overtakes China
With China close to reaching declining population and India soaring, India is anticipated to overtake China as the world’s most populous country in 6 years from now and rapidly move past. While China’s economy is substantially more developed, and critically has far more of the enabling infrastructure for growth, India will become a real economic rival.

India and China far ahead
The visual also illustrates the massive disparity in the population of these two nations and the next ones, dwarfing their size.

Nigeria ascending
Nigeria is the largest African nation and one of the fastest growing, on track to surpass US population by 2050. While its economy has struggled recently, far below its 7% run-rate for the first 15 years of the century, it is very likely to be a central economy in the burgeoning continent.

Indonesia slowing
Indonesia’s population growth has plummeted in recent years and looks to be reaching closer to developed country levels, however the economy is still likely to grow at a solid pace.

Brazil in decline
The most populous nation in Latin America, Brazil has a very geographically diverse economy, however its population are now in developed nation territory and its population is anticipated to start declining, with likely impacts on the economy.

Other subcontinent
Pakistan, while not growing quite as fast as India, is expected to become the fourth most populous nation in the world by 2050, while Bangladesh’s population growth has long slowed to close to replacement levels, with substantially different social and geographic dynamics from Pakistan.

Rest of Africa
Ethiopia and Congo are growing rapidly to put themselves in the top 10 nations by 2050, with a host of other fast-growing African nations just behind. Essentially the only nations with strong population growth will be in the subcontinent and Africa.

Declining nations
Not shown on this visual are those nations with the fastest declining populations, with at the top of the list Japan, South Korea, Singapore, Spain, Italy, and Greece. As we can already begin to observe, this will have a massive impact on these countries’ economies and social dynamics.

Migration
Of course in a world with massive disparities in population growth or reduction, there will be a massive pressures driving migration, and as a result, social and political disruption. More on this in other posts.

A final note of caution is that these forecasts are the United Nations “medium variant” predictions. There are a wealth of factors that could make these numbers turn out substantially different than forecast at a global and national level.

Prediction: the 2020s will build on the last decade of progress for an explosion...
Scroll to top
This website or its third-party tools use cookies to improve user experience and track affiliate sales. To learn more about why we need to use cookies, please refer to the Privacy Policy.