In preparing for the Ketchum Webinar Series on Tapping the Power of Mobile I wanted some data on international differences in mobile operating system shares. I was just about to begin compiling some data from StatCounter when my co-presenter One2One CEO Simon Noel pointed me to a visual created by iCrossing who have done a very nice job of it already. 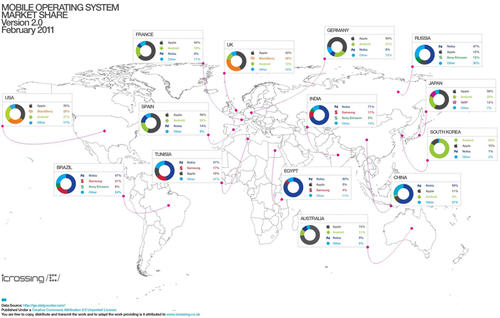 A few things stand out from this data:

* Apple iPhone is most dominant in Australia (with 74%), Germany, France and Japan, though in most major markets has lost market share to new entrants such as Android.

* Blackberry is only prominent in US and UK.

* Android has a massive dominance (84%) of the technology-lead market of South Korea, and has quickly reached solid market share in USA, France, Germany, and Japan.

* Nokia currently holds sway across the large fast-growth mobile markets, particularly in India, Egypt, and China, with around half the market in Brazil in Russia, however its share in China has fallen dramatically from 80% down to 59%. Nokia has negligible share in the US, UK, and Japan and small shares in continental Europe.

* Samsung is currently the second in market share in selected emerging markets such as Brazil and India.

Of course these market shares can and will change rapidly. I will be writing again soon on how the global mobile market may shift over the next few years.

Keynote speech in Beijing on How Technology is Transforming Business Tablet computers as seen from 1994
Scroll to top
This website or its third-party tools use cookies to improve user experience and track affiliate sales. To learn more about why we need to use cookies, please refer to the Privacy Policy.