As part of my work in helping global professional services firms build strategies for entrepreneurial markets, I’ve been spending some time with the trove of data from the Global Entrepreneurship Monitor, which is the largest study of entrepreneurship around the world.

One of the interesting issues I have been looking at is how varying fear of failure impacts entrepreneurial activity, as shown in the table below. 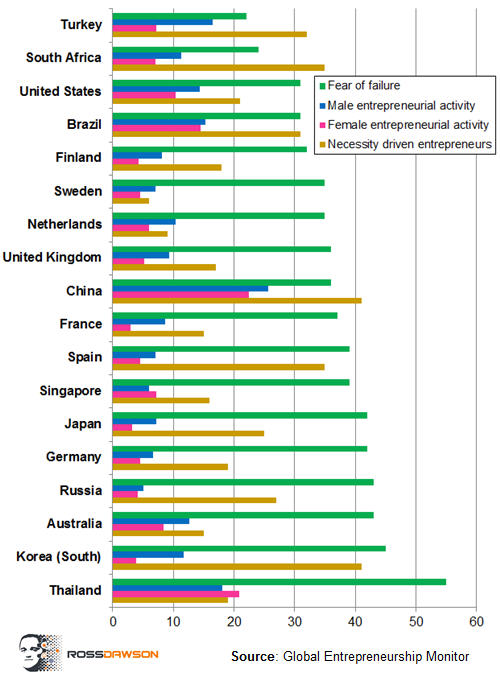 There are clearly many variables across countries in how these data points would relate, and no neat direct correlations, however some interesting perspectives emerge.

China is the standout in terms of entrepreneurial activity, however this is significantly driven by necessity.

Higher levels of fear of failure seem to constrain entrepreneurship in a number of countries, even those where are no alternatives for employment.

Thailand appears to be a country where people are successfully overcoming their fear of failure. Interestingly it is one of only two countries, along with Singapore, where female entrepreneurs outnumber males.

The ratio of male/female entrepreneurship not surprisingly appears to be driven significantly by cultural norms, with the biggest disparity in Turkey, France, Japan, and South Korea, however Northern Europe, which leads in female participation in politics and government, does not seem to do well in gender balance in entrepreneurial activities.

What do you think of this data? Are there any surprises or does it match what you would expect?

Perhaps the most interesting question is how can we decrease the fear of failure in national cultures, and would this help to drive higher levels of entrepreneurship?

Axiom Legal and the rise of virtual professional services Crowdsourcing Entrepreneurs drinks in Sydney this Friday
Scroll to top
This website or its third-party tools use cookies to improve user experience and track affiliate sales. To learn more about why we need to use cookies, please refer to the Privacy Policy.