The invention of the graphical web browser in 1993 was the moment that ‘getting online’ became meaningful, when we could start to post ideas, photos, and more that anyone in the world with an internet connection could access. However you needed a certain amount of tech knowledge to do that, and it was only from around 2000 that it began to get easy for anyone to blog, post images, share personal media among friends, and a little while after that to upload videos for the world to see.

Those born in the last five years, in this era of ready online sharing, have rapidly gained online identities, sometimes pretty much at the same time as their parents. Internet security firm AVG has done a survey showing how quickly these images are posted to the world. 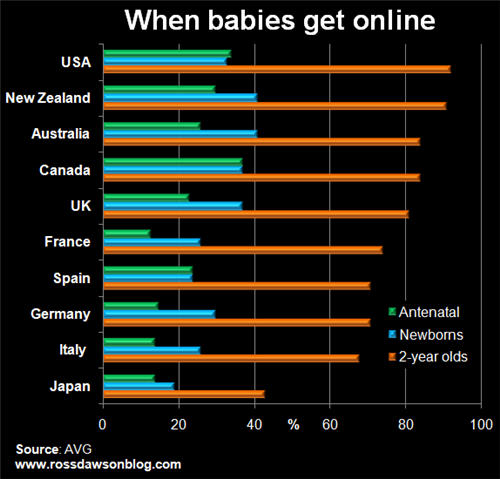 The figures are pretty startling, with in the surveyed countries 81% of 2-year olds having an online presence, and even 23% having prenatal sonograms uploaded online.

While this is a global phenomenon, there are some differences between the countries, with Canada the leader in babies getting an online presence before they are born (37%), Australia and New Zealand tied at 41% for newborns being on the Net, and the US coming up from behind to win the two-year old category with 92% of children by this age having an online identity.

In their press release, AVG warns that parents should think about the inexpurgable digital history they are creating for their children, intimating that they may embarrass them in later years, and being aware of privacy settings for visibility.

While these play to the company’s messages of internet security, they are fair points. I generally believe that most people today, including teenagers, are becoming well aware of the implications of sharing delicate content online: it can escape anywhere, has an infinite shelf-life, and can shape perceptions of you in a wide variety of contexts. However I have recently seen some examples that suggest those lessons aren’t been learned fast enough.

In any case, it is an extraordinary world in which we have an online presence from when we are born. And that is just the beginning. Imagine the online identities of these children through their lives. There is no going back.

Experiential futures and the intersection between design and foresight Six steps to success in a world driven by cloud computing
Scroll to top
This website or its third-party tools use cookies to improve user experience and track affiliate sales. To learn more about why we need to use cookies, please refer to the Privacy Policy.