In organizational network analysis circles, an MIT study on how people find information is often cited. The research showed that in an organization, people were five times more likely to go to people than to databases to get answers to their questions. So knowledge workers’ productivity is strongly related to their social networks, in terms of who they know who can help them, and whether there is sufficient trust and reciprocal value in the relationship that they get a response.

It is far more efficient and effective for people to be able to identify the most likely people to help them rather than barraging everyone with the one query and hoping that someone will respond. The early knowledge management systems were largely based on broadcast systems within organizations to be get help on particularly issues. In many cases companies used broadcast emails to get help.

People’s email inboxes have long been so overloaded that broadcast emails are rarely welcome. Certainly the highest leverage approaches to connecting knowledge effectively are in enhancing organizational networks, in terms of how well people know each others’ expertise and have strong social bonds. However now that a whole layer of new communication tools has emerged, there are new possibilities. Twitter in particular is already used within communities to ask questions and get ready responses, and many Twitterers will attest they have got great answers to pressing questions. So the question arises as to whether Twitter should be used as an organizational tool. 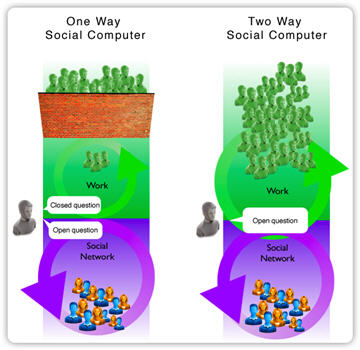 Sam Lawrence of Jive Software has done a nice piece titled Twitter: A two-way social computer, illustrating his ideas with the image above. Sam essentially suggests using Twitter internally only for proprietary or company-specific issues, and externally into the wider community for issues that can be shared. Effective professionals are already tapping their external networks using Twitter and other tools to do their work better. They should also be able to use the same tools inside the organization.

At our recent Enterprise 2.0 Executive Forum, one of the showcased companies, Janssen-Cilag, an Australian pharmaceutical subsidiary of Johnson & Johnson, gave us a snapshot of an internal tool they’ve developed called Jitter (see Nathan Wallace’s presentation and resources on his blog), which is essentially Twitter for the enterprise. It is designed to be robust and secure, and appropriate for company-internal communication.

Just as Twitter has been an experiment, in finding how people end up using it, similar initiatives inside the enterprise will also be experiments, that will have varying degrees of success, depending particularly on the organizational culture, and with only a subset of employees using the tools. At a certain point, just as email has become overload, the far lighter touch and interruption of a Twitter-like tool will also overload people. For now, there is absolutely an opportunity to use these tools to facilitate effective knowledge sharing in organizations. Ed Brill of Lotus (which was a Platinum sponsor of Enterprise 2.0 Executive Forum) is a recent convert to Twitter, and has some concerns about the enterprise use of the tool, including the potential to institutionalize ADHD, and to ensure – exactly to Sam’s point – that company-internal broadcasts stay within those boundaries.

Certainly these kinds of approaches are just part of the solution. Building relevant social ties based on trust and mutual understanding that enable focused, efficient questions and knowledge sharing will always be far higher value than broadcast mechansims. However there is definitely a role for light-touch queries inside organizations, and I’m sure we’ll see a lot more of that in the coming year or two.

Mobile social networking, meaning virtual networks bringing people physically... More media coverage of Enterprise 2.0 Executive Forum
Scroll to top
This website or its third-party tools use cookies to improve user experience and track affiliate sales. To learn more about why we need to use cookies, please refer to the Privacy Policy.