The Holmes Report recently released their fourth annual Creativity in PR Global Study and the results present a mixed bag on the status of right brain thinking in the PR profession. While there has evidently been an uptick in key areas – for instance viewing creativity as a key element in agency culture and more resources being devoted to creativity – there is still work to be done.

The study, conducted in association with H+K Strategies, provides both a snapshot and a somewhat longer view of the profession relative to its creative path.  But as with any study, the real insights are when the results of similar questions are considered together.

This year’s study included the question “Do you think the PR industry is set fair to deliver and lead creativity in the next five years, in terms of …?”. Respondents had four categories to respond to: Talent (hiring, training, diversity of workforce), Innovation, Agency Business Model, and Leadership.

Here’s how the responses netted out: 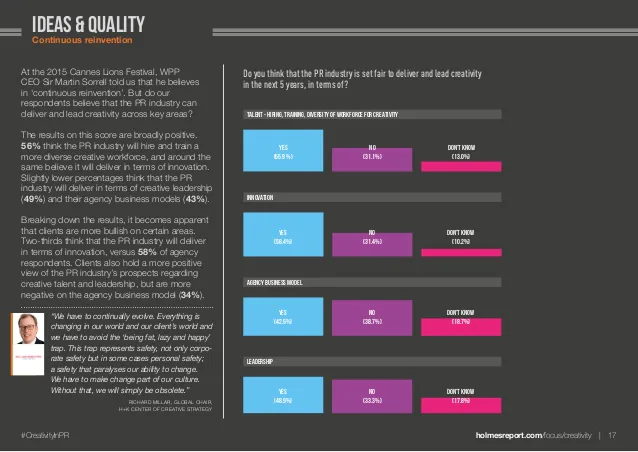 Unfortunately, this question wasn’t included in last year’s study, so there’s no way to know if there’s been a change. But there are both insights and dichotomies when the responses to this question are compared to the response to others.

Take talent for instance. Responses to a separate question about how agencies reward creativity indicated less than half (45.7%) do so as part of an annual performance review and a third don’t reward it at all. Taking that into account, how then could the industry as a whole be well positioned to hire, train and diversify for creativity into the foreseeable future? How many people – regardless of age group – will want to continue to work in an industry that says it values creativity, but your chances of being rewarded for it are less than 50 percent?

Let’s move to innovation. The greatest percentage of respondents to this question believes that the industry is poised to lead in this area. That’s all good, but when compared to the 50% of respondents who rated the current quality of creativity as ordinary in a separate question, there’s clearly a lot of work that needs to be done to get the industry to a leadership position in innovation over the next five years.

The Agency Model received the lowest percentage of yes votes relative to the long-term view and the highest number of no’s. Should we be surprised? The model has been in question for some time now, yet no one seems to know what to do about it. Unfortunately, when these numbers are combined with the fact that Leadership got the second lowest number of yes votes and the second highest number of no’s to this same question, it’s not difficult to see that the industry may be stymied in its efforts to be more creative.

Clients and agency personnel alike are providing some possible solutions. When asked if they could only do three things to improve their own or their company’s creative capabilities here are the top five responses:

Three of the above require more direct money and two require more time, which equates to more money. With money involved, change in the agency model and leadership mindset will be necessary to address all or most of these.

In other parts of the report, client input suggests they’re willing to spend the money on innovative ideas, but not if there’s no data to back up the approach. Advertising agencies have never had a problem with this. They create ideas, test them, iterate on the results then present concepts based on data. Brainstorming might have gotten them to the initial idea, but the results of the brainstorm typically don’t go immediately to the client without some kind of data to back it up. That’s a model that PR firms aren’t used to operating within but may need to get comfortable with.

It’s encouraging to see that the industry as a whole is continuing to move toward a greater focus on being more creative. This has been a conundrum that has affected PR for decades. But verbalizing what you want to be and proving it are two different things. Rather than pointing to ad agencies and wondering why they get to wear the creative mantle, PR needs to take a clue from them and mimic what’s allowed them to do so. It’s going to have to start with agency and in-house leadership – their future and the industry’s may depend on it.

Are Newspapers Truly Facing Extinction? What It Means to Be a PR Pro in 2016 and Beyond
Scroll to top
This website or its third-party tools use cookies to improve user experience and track affiliate sales. To learn more about why we need to use cookies, please refer to the Privacy Policy.