Crowdfunding is the topic of the moment, or maybe it only seems that way from the response to my recent posts on possible changes in regulation on crowdfunding and how the scene is developing.

Movies are probably the endeavor which has attracted the most crowdfunding initiatives, including:
– A Swarm of Angels (which I first wrote about in 2006)
– IndieGoGo (which started with films and has broadened into other creative spaces)
– The Age of Stupid
– Artemis Eternal (click on ‘Begin’ for details)
– BuyaCredit.com
– CinemaShares
and others.

Now a grand new experiment in movie crowdfunding is under way, with the Iron Sky project. The premise of this “dark science-fiction comedy” is that in 1945 Nazis went to the moon, and in 2018 they are coming back… It has all the makings of a cult classic, which is exactly the kind of movie that does well in crowdfunding. Budgets are small (compared to Hollywood), a limited pool of dedicated fans can make the venture profitable, and the crowdfunding process is integrated with building a community that will want to see the movie and spread word to their friends.

Check out the awesome trailer:


The film has a budget of 7.5 million Euros, of which it has raised a little over 6 million through traditional film financing channels. They are seeking to raise 900,000 Euros through a variety of crowdfunding mechanisms, and are using the project as an experiment to find what works best. You can read in more detail about their initiatives.

They have four different mechanisms for raising money directly: a store selling merchandise such as T-shirts, a sneak peek of the first minutes of the film for which fans can pay any amount from 1 Euro, Fan Investments for qualified investors and up to 99 individuals in EU and some other countries, and ‘War Bonds‘, which are basically framed certificates. 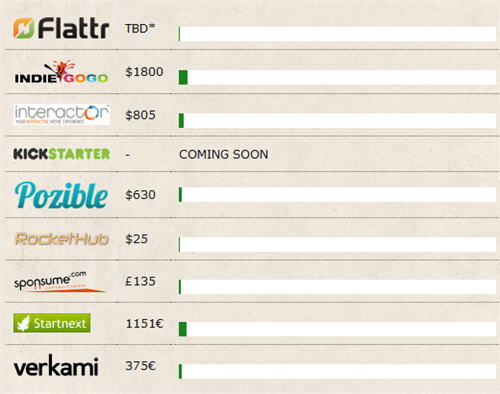 They are also benchmarking 9 different crowdfunding platforms, as above, running them in parallel with as similar as possible conditions between them, to see which ones garner the most financial support.

They will write up their experiences and lessons learned. In any case they are certainly forging a path for other film-makers to follow.

Bring on the attack of the space Nazis!

Launch of Future of Sex: why we’re doing it Future of Retail: 10 powerful trends and 1 meta-trend
Scroll to top
This website or its third-party tools use cookies to improve user experience and track affiliate sales. To learn more about why we need to use cookies, please refer to the Privacy Policy.