I recently gave the after-dinner speech at the annual dinner of the Urban Development Institute of Australia in Darwin.

I had never been to Darwin before, and I found my brief visit as well as my research preparing for my talk fascinating in getting a feel for the city.

In my speech I brought together some entertaining perspectives with more serious views of the global macro environment and the opportunities I see for Darwin. Among other topics I compared Northern Territory’s demographic profile with that of Australia and adjacent economies such as Indonesia and China. Many of Darwin’s challenges and opportunities are expressed in this data. The charts are created from the Australian Bureau of Statistic B Series (middle path) forecasts for Australian population. 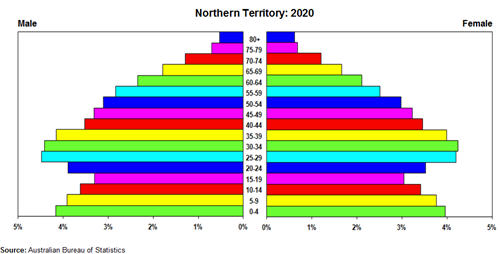 Here are just a few insights and perspectives on Darwin I gained in preparing for my speech and during my visit:

* Darwin is one of most geographically isolated cities in the world. The closest Australian city, Adelaide, is 2600km away, with many Indonesian cities as well as parts of Papua New Guinea, Brunei and the Philippines closer. The feeling is of a real frontier-town, in which people feel set apart from the rest of the world.

* It is the only city in the world that has been completely destroyed twice – once by Japanese bombing in the second world war, and once by Cyclone Tracy on Christmas Day 1974, which razed 60% of the buildings in the city.

* Weather dominates the city, with a completely dry season for half the year, followed by an intensely humid ‘build-up’ and wet season that before air-conditioning was called “suicide season”.

* The city is essentially a worker town. As shown in the age profile above, many are drawn to the city for the work, which includes military postings. They have children there, but very few stay in Darwin into their retirement, retreating to more temperate climates elsewhere in Australia.

* As a result it has the most transient population in Australia, with around 8% of the population leaving and arriving each year.

* The presence of massive Liquid Natural Gas (LNG) fields near Darwin means its population and economy is driven by resources projects. The Conoco Phillips project commenced in 2003 brought a large influx of workers to the Darwin, while the Inpex $25 billion project which is about to commence is expected to bring 7,000 new well-paid workers into a city of 125,000 people.

* These influxes have a major impact on the local economy, with housing prices rising 40% during the Conoco project. While housing affordability is the best in Australia due to the high local wages, average house prices are still A$515,000, undoubtedly one of the highest in the world for a city this size.

* While Darwin is geographically and economically close to Asia, it still needs to do more to bring those ties to life. An excellent report on the local creative industry,Creative Tropical City: mapping Darwin’s creative industries, points out that while many people speak about the importance of Asian networks, are hard-placed to name specific instances. 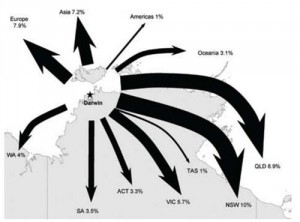 Darwin’s location and cultural and economic dynamics make it absolutely unique – it feels that way and it truly is extraordinarily distinctive. There are few global reference points, though Darwin’s chief minister recently visited Aberdeen in Scotland to learn from its lessons as a remote town transformed by the oil economy.

As I said in my speech, I believe that Darwin can create an extraordinary future for itself. One of the key challenges is creating enduring community alongside the reality of its transient population, making it a permanent home for families and generations. The foundations of that are in place. It will be fascinating to see how the city takes the opportunity it has.

The continuing devaluation of LinkedIn connections Support for crowdfunding in Obama’s Jobs Bill is taking it mainstream
Scroll to top
This website or its third-party tools use cookies to improve user experience and track affiliate sales. To learn more about why we need to use cookies, please refer to the Privacy Policy.