Long-time followers of this blog will be familiar with the beautiful and insightful work of Richard Watson, including his Periodic Table of Disruptive Technologies and Innovation and Timeline of Emerging Science and Technology (both created with the Imperial TechForesight group at Imperial College London), as well as a number of frameworks Richard and I have created together, including Life Next Year and Beyond and the Trend Blend series such as Trend Blend 2009+.

Now Richard and Imperial TechForesight have created a beautiful map of the Future of Urban Air.

An image capture is below but the map is highly detailed and needs to be seen in its interactive format. 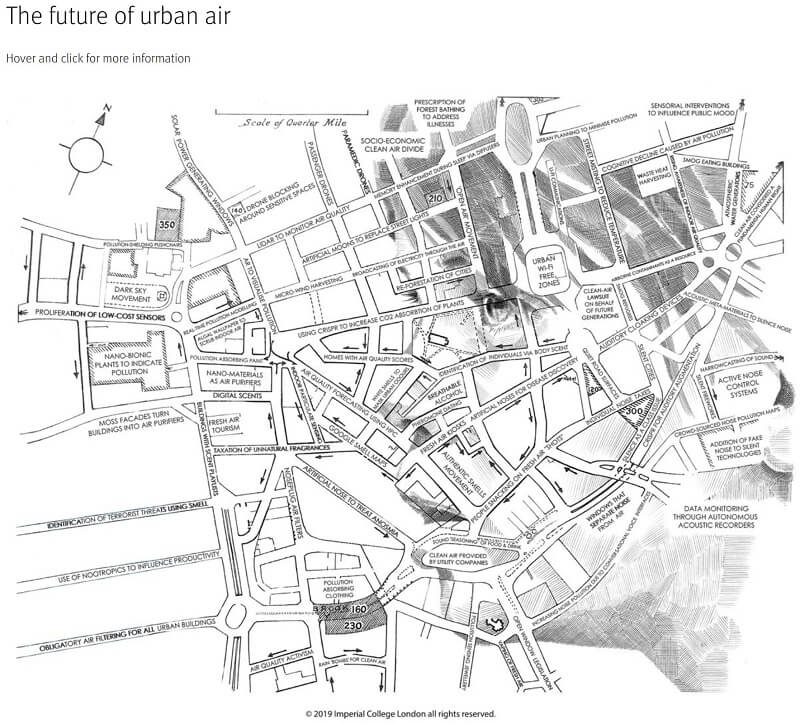 Findings from the future of urban air map include:

FROM INVISIBLE TO VISIBLE
Air is an invisible medium and it’s easy to forget about the journey that our urban air has made. Many people in the UK were surprised when the sky turned orange as a result of desert sand blown from the Sahara in 2019. Technologies that make the impact air more visible could help improve urban air: for example, big data tools for tracking air quality in cities, low cost sensors for monitoring indoor environments, or augmented reality for viewing pollution in real time.

SENSES WORKING OVERTIME
Pollution is not limited to what we inhale: noise pollution also poses a serious threat to human health. New technologies could help prevent cities becoming unliveable due to noise. The map highlights examples such as unique forms of tarmac that lead to quieter road surfaces, metamaterials that could help silence buildings and cities with cladding made from novel materials.

The map also addresses the sense of smell and the risk of sensory overload through fragrances. In future, the map suggests, people might navigate the urban environment using smell maps. And we might decide to tax individuals with an overbearing fragrance footprint.

SOCIO-ECONOMIC AIR DIVIDES
Pollution does not affect the rich and poor equally and there are links between socioeconomic status and exposure to air pollution. The map highlights issues such as the prevalence of ‘smog refugees’, who leave cities in search of clean air, and fresh air tourism, where hotels and stores aimed at the luxury market promote a clean air experience. Inequality is not limited to air pollution and there are risks of similar issues with noise and light pollution.

The future of healthcare lies in building value-based ecosystems

AI-written articles will force humans to improve the quality of their writi...
Scroll to top
This website or its third-party tools use cookies to improve user experience and track affiliate sales. To learn more about why we need to use cookies, please refer to the Privacy Policy.