Earlier this year I wrote about the top 25 startup hubs in the world as ranked by the Startup Genome project.

As I noted at the time, it was based on skewed data from the sample used, but was probably the best available. The project has now released updated and more detailed data ranking the top global startup ecosystems on a wide range of criteria. It makes for interesting reading. You can register to download the full report.

This is considerably better data than the first round, in particular in providing richer comparisons of the differences between the cities in how the startup scene is structured. On the rankings, we think we can do better, and we are planning to launch a framework that will provide insights into the relative performance of startup hubs around the world. For now, the Startup Genome data is the best available, and a great resource for understanding the global startup scene.

Below are quick highlights from each of the top 20 cities. This includes, in addition to brief notes on distinctive aspects of the startup scene, a chart showing performance relative to top-performing Silicon Valley on 8 indices: 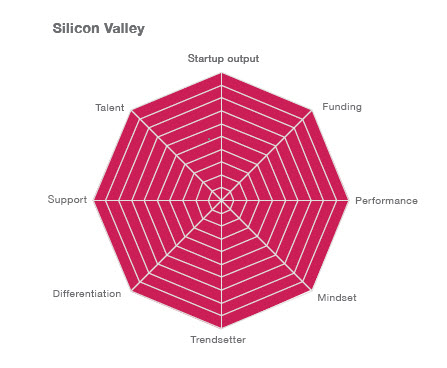 Capital raised in SV is 32% higher across all stages of a startup’s development. Silicon Valley entrepreneurs are much more ambitious, shown by their vision, working hours, commitment to full-time work and other factors. 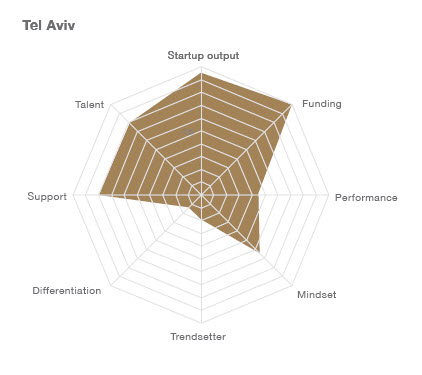 Talent as measured by post-graduate education is almost as high as Silicon Valley. Capital availability is very good. However average company performance in terms of growth and revenue is only 12th in the survey, with more startups focusing on smaller or niche markets. 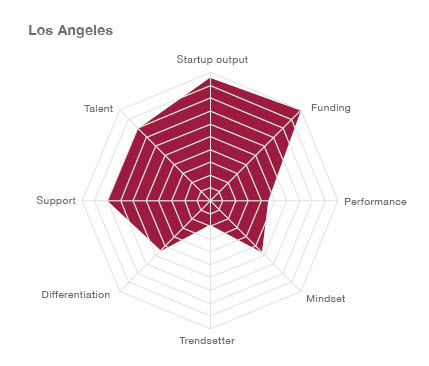 LA startups are 58% more likely than in Silicon Valley to focus on consumers as their primary market and43% less likely to have SMEs as their main payer. LA only ranks 11th in Entrepreneurial Mindset with generally lower risk tolerance. Funding is more likely to be from self or friends rather than VC.

4. Seattle
Data is not provided in the report. 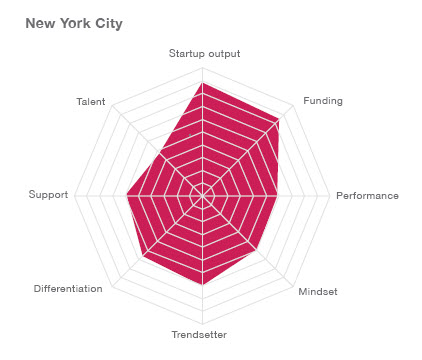 New York is the second largest ecosystem in absolute size, with a strong emphasis on consumer startups and early monetization. There are more female entrepreneurs in New York than anywhere else, at 18%. 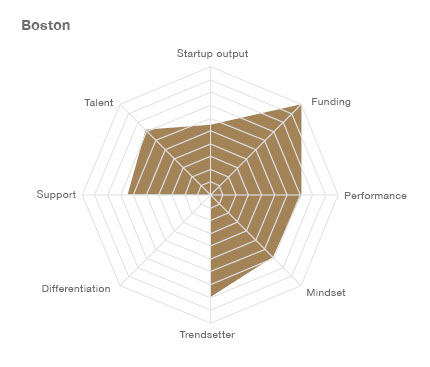 Boston entrepreneurs are highly educated, with 50% having higher degrees and three times more PhDs than Silicon Valley. They are relatively far more motivated by creating great products than getting rich or changing the world. 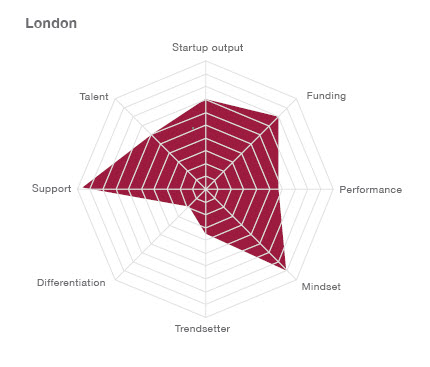 London startups raise only 19% as much as Silicon Valley startups before product market fit. There are relatively 30% fewer startups in the mobile space than Silicon Valley or New York, and almost half as many serial entrepreneurs. 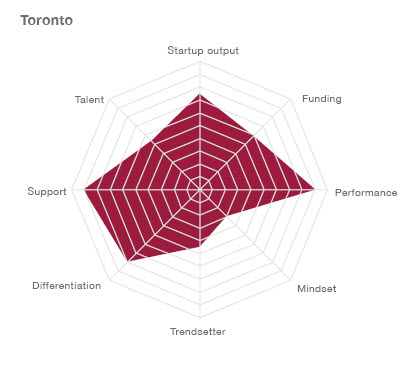 Toronto’s overall profile is very similar to that of Silicon Valley, though get only 29% of the funding because of a lack of funding source diversity. Perhaps as a result, over 70% more Toronto entrepreneurs than in Silicon Valley consult on the side.

The profile of Vancouver startups is distinctive compared to Silicon Valley, with almost 3 times as many startups based on advertising revenue, and just 41% as many considering customer acquisition as the primary challenge. Mobile is a major focus.

10. Chicago
Data is not provided in the report. 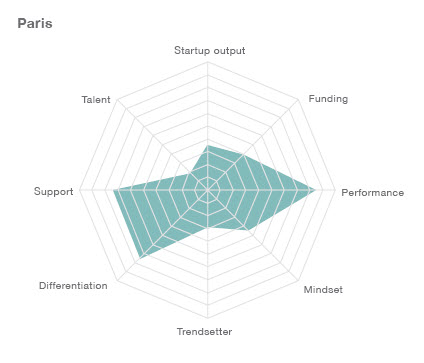 Paris is mainly a domestic startup scene, particularly compared with London and Berlin which are highly international. They far more frequently look to clone models from other countries for the local market. Funding and distribution are generally strong. 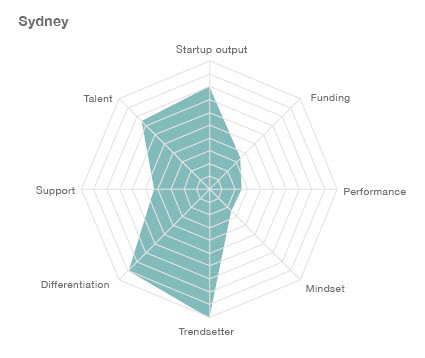 Sydney ranks equal 1st with Silicon Valley in the ‘Trendsetter Index’. There are considerably fewer employees than is common for other hubs and more funding by founders and friends than venture capital. Startups are relatively far more focused on SMEs and less on consumer markets. 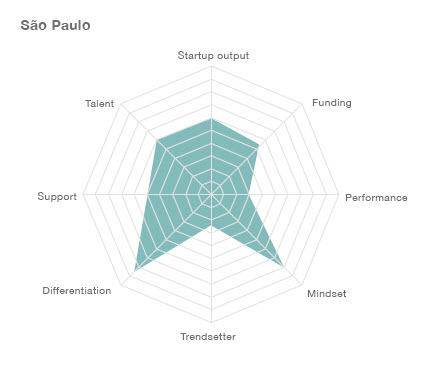 Entrepreneurs in São Paulo are younger and less likely to be serial entrepreneurs. Revenue models are distinctive, with considerably more focus on transaction and license fees rather than subscription or advertising. 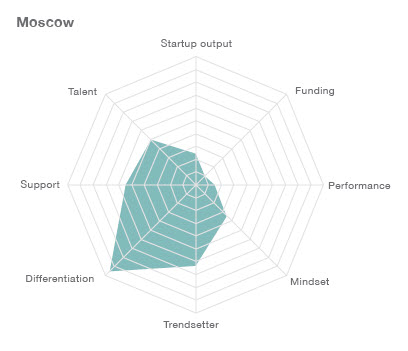 Funding is less available in Moscow, with over 90% less capital available in stages 2 and 3 in particular. Entrepreneurs are considerably younger, though less ambitious, than in Silicon Valley and are highly concerned with building the product. There is considerably less diversity in types of startups. 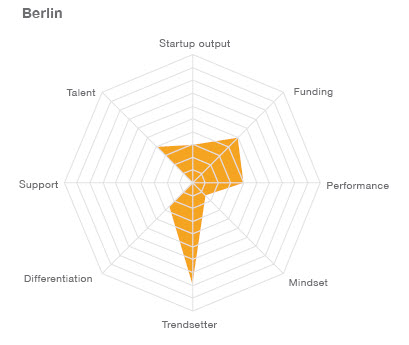 Berlin has just 12% as many startups as Silicon Valley, but a lot of energy as a European startup hub. Berlin startups are considerably less ambitious in terms of markets and market size targeted. 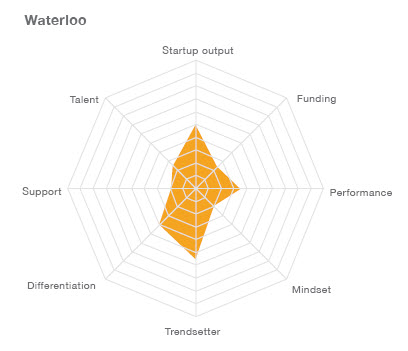 Waterloo is just 100 kilometers from Toronto but hosts a distinct and large startup community, with many hosted in or funded by accelerators. Mobile is a significant focus, and there is substantially more outsourcing of product development than in Silicon Valley. 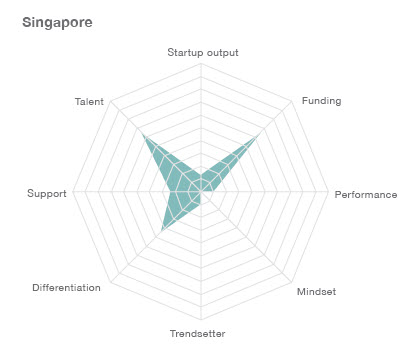 Singapore’s startup community is supported indirectly by the government. Funding is often from incubators or self-funding rather than accelerators or VCs. Startups are substantially less data-driven than in other centers. There is greater emphasis on mobile and non-web software. 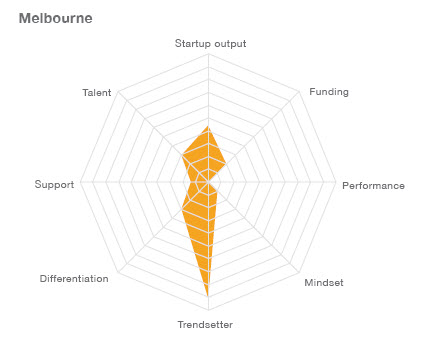 Melbourne has a significant funding gap, with as much as 97% less funding in stage 2. There are relatively few employees. Melbourne startups are 42% more data-driven than in Silicon Valley.

In many ways Bangalore startups have similar profiles to those in Silicon Valley, however revenue models differ, with transaction and license fees heavily over-represented. 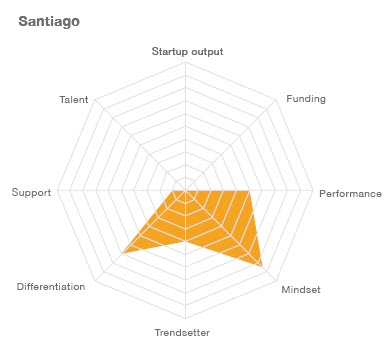 The government Start-Up Chile initiative has helped develop entrepreneurship in Santiago, with accelerators and incubators being a strong source of funding and support.

Keynote slides: Creating Massively Successful Networked Organizations Google Atmosphere: The future of the enterprise and the economy of individu...
Scroll to top
This website or its third-party tools use cookies to improve user experience and track affiliate sales. To learn more about why we need to use cookies, please refer to the Privacy Policy.