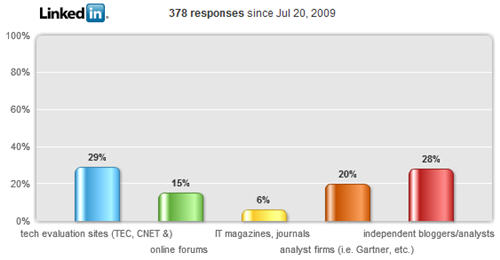 On the survey page the results can be sliced in several ways, including by job function, which shows some major differences in the sources used.

There have been many similar studies done over the last years, though the results change both by type of company, and also evolve rapidly over time. The results show the rising clout of the new breed of independent analysts relative to the high-cost traditional analyst firms.

As another reference point, three years ago I did a very detailed study of influence networks in technology purchasing, titled How Technology Purchasing Decisions are Really Made. While the details of the sources used for technology purchasing have undoubtedly changed, I expect the networks of people involved in the decision process will have changed very little.

Chris Anderson on the social filtering of news and media The best visuals to explain the Singularity to senior executives
Scroll to top
This website or its third-party tools use cookies to improve user experience and track affiliate sales. To learn more about why we need to use cookies, please refer to the Privacy Policy.