Some very interesting data just out from Nielsen on social media usage. The headline is that people in developed countries are spending 82% more time on social media than they were one year ago.

However the data point that struck my interest most is that…

Australia is #1 globally in usage of social media 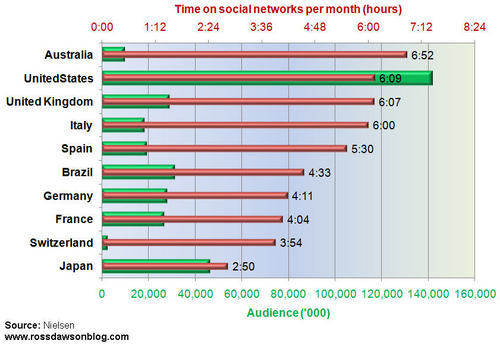 This is a real news. For many years I was bemoaning the slow uptake of social networks in Australia. Research featured as late as our Future of Media Report 2007 showed that Australia was dramatically behind the US and UK in Facebook usage, though it was beginning to catch up on usage of MySpace usage and tools such as Photobucket.

I was long having to come up with explanations as to why Australians were so slow at taking up social media. A Sydney Morning Herald article in 2007 reported my findings that blogging was one sixth as prominent in Australia as other English-speaking nations, and suggested it wasn’t important. In response I wrote Why less blogging is a matter for national concern, referencing my early piece Australia needs a debate on why it lags in online and network thinking

Since then I have been very encouraged and excited at the pace that the Australian online and social media space has moved ahead. I have often said that in almost any domain, some of the very top people in the world are Australian, however that understanding or expertise is often not widely diffused. Now, clearly there is a far broader uptake of network thinking, as evidenced at least by use of social media.

Why are Australians now such avid users of social media after a very slow start?

I have a few thoughts gestating on this that I’ll structure a bit before sharing.

[UPDATE:] Here are Some thoughts on why Australians are #1 globally on social media usage (from a slow start)

I’d love to hear what you think.

We are fast learning how to create “enhanced serendipity” Some thoughts on why Australians are #1 globally on social media usage (from...
Scroll to top
This website or its third-party tools use cookies to improve user experience and track affiliate sales. To learn more about why we need to use cookies, please refer to the Privacy Policy.