ComScore has just released global Twitter usage figures for March, showing a 95% growth in the month to 19.1 million visitors. 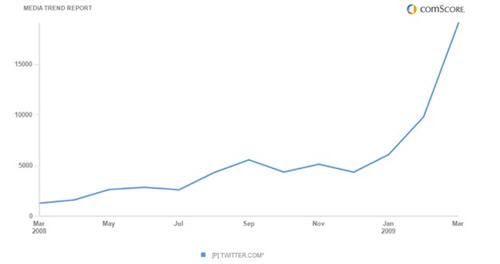 Using the same methodology as my At current growth rates everyone in the US will have a Twitter account by August 22 2009! blog post from last week (extrapolating current exponential growth rates)…

US users currently comprise 48.6% of global visitors. It’s interesting that US growth is 131% compared to global growth at 95%. If these growth rates continue the US will again have the majority of global users, after having started as a mainly US application and then gained significant traction internationally. Undoubtedly by later this year global growth rates will pick up relative to the US (especially since everyone in the US will be on Twitter by August 22!)

10 DOs and DONTs of organizational change Living Networks – Chapter 9: The Flow of Services – Reframing Digital...
Scroll to top
This website or its third-party tools use cookies to improve user experience and track affiliate sales. To learn more about why we need to use cookies, please refer to the Privacy Policy.