I recently spent three days in Kuala Lumpur, running a two-day workshop for a client and meeting a number of very interesting people. I hadn’t been to Malaysia for six years, so it was great to get back. I thought it was worth sharing a few top-of-mind impressions and thoughts from my brief time there.

The first impression is how rapidly KL has developed in the last years. The glamorous new airport, wide highways everywhere, and the extraordinary Putrajaya area, which houses the federal government, are testament to the massive investment in infrastructure over the last years.

However traffic in KL remains abominable at rush hour. People sometimes choose to wait a couple of hours before driving home, and expect to get home at the same time anyway. 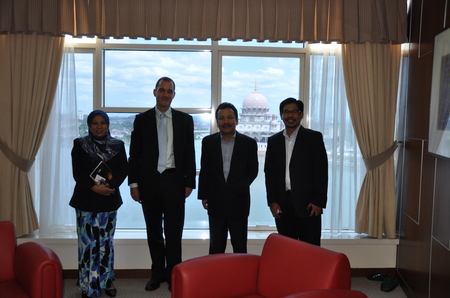 I was very fortunate to have Nik Hasyudeen, the former president of the Malaysian Institute of Accountants and recently announced executive chairman of the Audit Oversight Board, as my guide for part of the trip. Nik is a connector extraordinaire, and adds to his broad experience in business strategy a great appetite for innovation.

Malaysia’s famed Multimedia Super Corridor (MSC) has been through ups and downs since its launch in 1996, when Prime Minister Mahatir established it as a drawcard for global technology companies. I had followed this with interest from the start, and was fortunate to meet Matthew Barsing, the head of Foreign Direct Investment to the MSC, while I was in KL.

Malaysia has established itself as a major services outsourcing center, and is now gaining credibility in areas such as computer animation. However given its smaller population it is not able to take on very large contracts.

It is encouraging to see the Malaysian economy is rebounding dramatically from its deep trough last year, with HSBC recently predicting 7.3% growth this year, above government forecasts.

The Malaysian government’s intent is to develop technology and high-value services to accelerate growth. While it has a solid base to do so in the MSC and some of its other initiatives such as MIGHT, which works on innovation and futures thinking, there will be significant challenges to accelerate change.

The economic clout of China and India is taking attention from South-East Asia. Malaysia, because of its size (population of 28 million), needs to focus on niches in which it can build global expertise. It can’t scale to provide the for example the same scope of IT outsourcing as India. But it can develop areas that bring together global networks and create real value. I look forward to seeing the progress of Malaysia’s innovation.

Outsourcing journalism – how far can you take it? A few thoughts on Twitter’s ‘Promoted Tweets’
Scroll to top
This website or its third-party tools use cookies to improve user experience and track affiliate sales. To learn more about why we need to use cookies, please refer to the Privacy Policy.