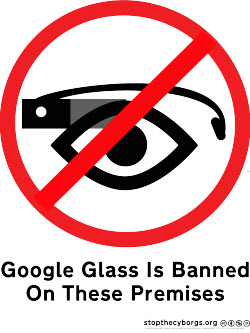 A good while ago in my book Living Networks I wrote about the same topic, drawing on David Brin’s excellent The Transparent Society:

David Brin evokes two worlds in his book The Transparent Society. In both, everything we do is visible. The difference between the two worlds is whether that transparency is one-way or two-way. We can take it for granted that government and big business will know almost everything about us. The question is whether individuals will be able look back, to make the institutions themselves visible and accountable. That will almost inevitably happen in time—the shift to transparency is unstoppable—however we all need to push hard so that it doesn’t take longer than it should. In every aspect of our lives, transparency will be a reality, and we will need to change the way we think and act to make it an opportunity rather than a liability.

The man who has been sporting the predecessors of Google Glass for the longest, University of Toronto professor Steve Mann, has been hounded and even attacked in fast food restaurants and department stores for recording video. His not unreasonable response is to ask why he can’t film them when they are filming him at all times.

I have been closely following the evolution of privacy for well over a decade. During that time it has been quite startling quite how easily most people have allowed their privacy to be eroded.

The next phase in which not just institutions, but also individuals, are watching and recording almost everything that happens in public spaces, is a dramatic step further, and the outcome is unpredictable.

As I suggested in my interview for the article, while many may start finding things are going too far, most likely we are shifting into a world in which most people accept an extraordinary degree of personal visibility.

We are entering an entirely new phase of the loss of our privacy. As I wrote in Living Networks, let’s do what we can to make this an opportunity. Certainly let’s draw the lines where they need to be drawn. But let’s not put ourselves in the position of individuals being the only ones who are transparent and institutions the only ones who are watching.

Building success in the future of work: T-shaped, Pi-shaped, and Comb-shaped... How drones could build real-world networks to transform delivery of food, medicine,...
Scroll to top
This website or its third-party tools use cookies to improve user experience and track affiliate sales. To learn more about why we need to use cookies, please refer to the Privacy Policy.