Best futurists ever: How Margaret Atwood tries to prevent dystopian futures by writing about them 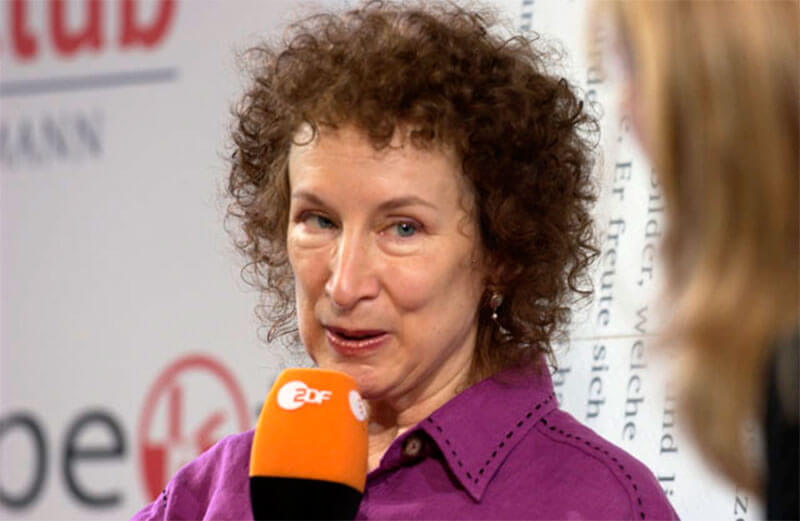 Although she’s been called a “prophet” for her works of speculative fiction, renowned Canadian writer Margaret Atwood resists the label. By her own account, she says she doesn’t predict the future so much as she sees present-day warning signs and what they could mean for society if left unchecked.

“All stories about the future are actually about the now,” she said in a 2017 interview with Slate. “However, it’s also true that you generally look ahead of you to see where you’re going and that’s what those kinds of books are like. They’re like blueprints of the possible futures that help us to decide whether that is where we want to go.”

Atwood, it appears, is not just trying to wake us up. Highly attuned to the zeitgeist and ahead of public debates, she wants to knock us off course a path headed toward misery, catastrophe, and isolation. In particular, the dystopian worlds she has depicted call attention to the threats posed by authoritarianism, bioengineering, and sex robots.

Authoritarianism in The Handmaid’s Tale

Following the election of Donald Trump as President of the United States, nearly 20 years after it was first published, Atwood’s The Handmaid’s Tale reappeared on the bestsellers list. The timing was no coincidence.

Set in a near-future in the Republic of Gilead, a theocratic authoritarian regime located in what was once the United States, many literary fans drew parallels between the fictional government’s fascism and treatment of women and the rise of Trump’s America.

While American women weren’t being forced into sexual surrogacy like Atwood’s handmaids, there was clearly fear and a sense of a regressive shift underway. On a larger scale, some feel the writer’s work has been prescient of what is now perceived as a global trend toward authoritarianism.

Anti-Trump protesters were spotted carrying placards like “Make Atwood fiction again”, “The Handmaid’s Tale is not an instruction manual”, and “No! To the Republic of Gilead.” At an abortions’ rights demonstration, women dressed in the red cloaks and Amish hats of the handmaids.

Atwood’s decision to include only events in the book that had occurred in history, such as mass executions, book burnings, and state-supported birthing and kidnapping programs, has likely fuelled more concern. What has happened before can happen again, and she wanted to open our eyes to where she thought society could be going.

“The Handmaid’s Tale was about trends that were already there in the now event, and what might happen if those trends continued on in that way,” Atwood told Slate. If the novel’s popularity among demonstrators is any indication, many people believe that government control and restrictions on freedom and human rights are on the rise.

Bioengineering in Oryx and Crake

Even more striking is how Atwood foresaw the creation of bioengineered pigs with uncanny accuracy in her 2003 novel Oryx and Crake. In this piece of speculative fiction, which is part of her MaddAddam trilogy, she writes about how human-pig chimeras called “pigoons” are genetically engineered to grow human organs for transplant.

“The goal of the pigoon project was to grow an assortment of foolproof human tissue organs in a transgenic knockout pig host—organs that would transplant smoothly and avoid rejection, but would also be able to fend off attacks by opportunistic microbes and viruses, of which there were more strains every year. A rapid-maturity gene was spliced in so the pigoon kidneys and livers and hearts would be ready sooner, and now they were perfecting a pigoon that could grow five or six kidneys at a time.”

Like the scientists in Oryx and Crake, his goal has been to tackle the global shortage of organs for transplant by growing functional human ones inside of pigs. So far Ross has been successful is getting one of his animals to grow a human pancreas.

Yet fortunately, and unlike in the MaddAddam trilogy, we are not living in a post-apocalyptic world roaming with highly intelligent, killer pigs created in a well-intentioned scientific experiment gone horribly wrong.

However, the troubling dystopian future in which pigs develop human brains is not outside the realm of possibility.

“We think there is very low potential for a human brain to grow, but this is something we will be investigating,” Ross told the BBC.

In Atwood’s 2015 book The Heart Goes Last, she portrays a near-future stricken with poverty yet flourishing with technological advances that surpass our own. They include highly realistic humanoid sex robots called “prostibots” that can resemble celebrities.

“And this is the Marilyn section,” says Budge. “You can have five different hairstyles, and in the outfits you get a choice too, depending on what movie. That’s from Gentlemen Prefer Blondes, the pink dress; there’s the black suit from Niagara, and over there is the all-girl jazz band one from Some Like It Hot…” “Where are these headed for?” says Stan. “The Oprahs. Are they that into Oprah, in Holland?” “You name it, someone’s gonna be fetishistic about it,” says Derek. “Our biggest customers are the casino operations.”

Our world hasn’t reached the same level of capability in creating convincing android lovers. Still, Atwood’s focus on the integration of high-level robotics into sex work and the related moral dilemmas are particularly topical today.

In April 2018, the first robotic sex doll head officially went on sale. Developed by popular silicone love doll company Abyss Creations with the help of top roboticists, the head makes human-like speech and expressions and attaches onto sex doll bodies. A fully robotic version of the body is also in development.

Atwood has also accurately anticipated today’s controversial arguments on the topic, including whether it is ethical to make sexbot replicas of living people without their consent or ones that resemble underage children.

In his book review for The Guardian, M John Harrison address the latter:

“During production the as-yet headless bodies of the prostibots, writhing and grinding through a test sequence, smell of plastic, a problem cured later in the process by the addition of an artificial pheromone. At that stage the customer is offered an additional choice of scent: orange blossom, rose, ylang-ylang, chocolate pudding or Old Spice.All good clean fun until you get to the “kiddybot” model, packaged in “white nighties and flannelette sheets”, with blue knitted teddy bear “for extra-realistic effect”. Even Stan’s co-workers–used to rationalising their own behaviour in accord with their needs–find this a bit close to the bone.

Again, the Canadian writer expresses her fears of the future, hoping to frame how we think about it and prevent harmful outcomes but putting them in print.