Best futurists ever: Nikola Tesla and his electrifying predictions 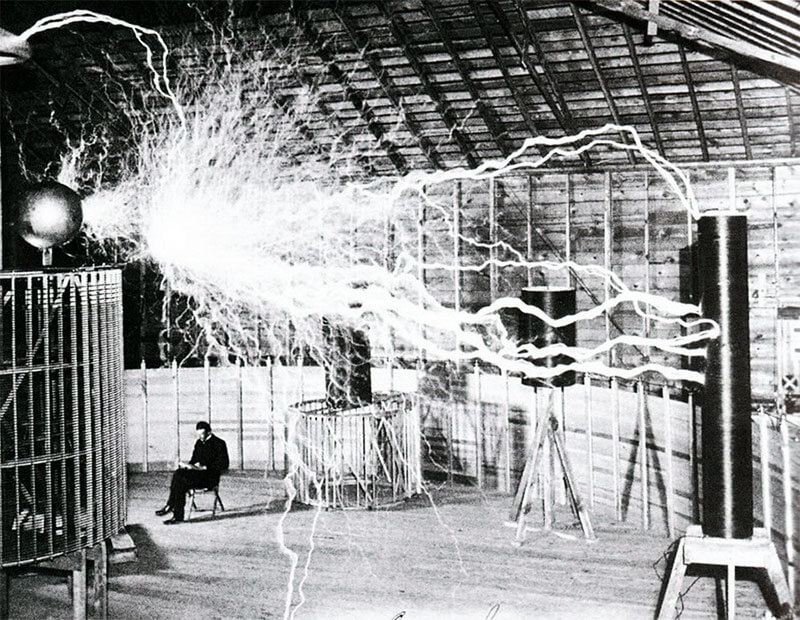 “At present we suffer from the derangement of our civilization because we have not yet completely adjusted ourselves to the machine age. The solution of our problems does not lie in destroying but in mastering the machine.” —Nikola Tesla, “A Machine to End War”, 1937

Serbian-American inventor Nikola Tesla is perhaps best known for his contribution to the design of modern electrical power—or, in more recent years, as the eponymous inspiration for Elon Musk’s electric car company.

The late inventor, engineer, and physicist held roughly 300 patents by the end of his life. The many inventions and ideas he conceived during his lifetime were also crucial to the technologies we rely on today. The most well known of these might be the Tesla Coil—a device that created pulses of extremely high voltage electricity that surpassed expected limits at that time.

Yet Tesla’s remarkable achievements do not stop at his significant contributions to the field of electrical engineering. He also made some startlingly accurate predictions for the late 20th and 21st centuries. Some of these were made in this 1926 interview in Colliers magazine titled “When Woman Is Boss” (but more on that topic later).

We’ve highlighted a few of Tesla’s most interesting predictions below.

It’s all too fitting that Elon Musk’s car company was named after Nikola Tesla; not only was the late inventor a pioneer in the development of electrical power, he also predicted self-driving cars.

“As early as 1898, I proposed to representatives of a large manufacturing concern the construction and public exhibition of an automobile carriage which, left to itself, would perform a great variety of operations involving something akin to judgement.” —Quoted from Prodigal Genius: The Life of Nikola Tesla, by John J. O’Neill, 2006

More than a century later, this is a burgeoning technology that seems to be improving regularly.

In 1898, at an Electrical Exhibition at Madison Square Garden in New York City, Tesla unveiled a new invention: a remote-operated boat. Four-feet long and equipped with a radio antenna, the watercraft was steered around a small pool. Like many technologies in their infancy, it was regarded by some as magic.

The spectacle was a demonstration of the potential power of machines; Tesla showed that machines could (eventually) be controlled from a distance and operate autonomously.

“At present we suffer from the derangement of our civilization because we have not yet completely adjusted ourselves to the machine age. The solution of our problems does not lie in destroying but in mastering the machine.

“Innumerable activities still performed by human hands today will be performed by automatons. At this very moment scientists working in the laboratories of American universities are attempting to create what has been described as a ‘thinking machine.’ I anticipated this development.

“I actually constructed ‘robots’. Today the robot is an accepted fact, but the principle has not been pushed far enough. In the twenty-first century the robot will take the place which slave labor occupied in ancient civilization. There is no reason at all why most of this should not come to pass in less than a century, freeing mankind to pursue its higher aspirations.” —Quoted from A Machine to End War, by Nikola Tesla and George Sylvester Viereck, 1937

As is clear today, many of the tedious jobs and tasks once performed by humans are now automated. This ongoing evolution of work may continue indefinitely as new technologies and services emerge.

It must also be noted that Tesla, rather grimly, conceived of military uses for his remote-controlled technology, including radio-controlled torpedoes. However, the US Government showed little interest at the time (though its navy did eventually finance some trials in 1916).

Of course, present-day military weapons, vehicles, and devices very much depend on remote operation and radio frequencies, as is demonstrated by the drones that carry out much of the warfare in the world today—not to mention armaments such as torpedoes, rockets, satellites, and bomb disposal robots.

In 1926, the same year the first transatlantic telephone call was made (from London to New York), Tesla envisioned a future of wireless communication with devices uncannily similar to those we use today.

“When wireless is perfectly applied the whole earth will be converted into a huge brain, which in fact it is, all things being particles of a real and rhythmic whole. We shall be able to communicate with one another instantly, irrespective of distance. Not only this, but through television and telephony we shall see and hear one another as perfectly as though we were face to face, despite intervening distances of thousands of miles; and the instruments through which we shall be able to do this will be amazingly simple compared with our present telephone. A man will be able to carry one in his vest pocket.” —Quoted from “When Woman Is Boss,” an interview with Nikola Tesla by John B. Kennedy, 1926

Foreseeing a device that would utilize both video and telephone technology, and would be facilitated by a wireless network, it seems clear that Tesla was inadvertently describing the smartphone. Furthermore, Tesla expected the imminent coming of a global digital network that sounds a lot like the Internet.

Today, wireless technology is far from “perfectly applied” but it’s certainly ubiquitous—which brings us to Tesla’s next prediction.

Hand-in-hand with his thoughts on the possibility of the smartphone, Tesla also predicted Wi-Fi, the “Internet of things,” and the digital delivery of news and media.

“Present wireless receiving apparatus will be scrapped for much simpler machines; static and all forms of interference will be eliminated, so that innumerable transmitters and receivers may be operated without interference. It is more than probable that the household’s daily newspaper will be printed ‘wirelessly’ in the home during the night. Domestic management—the problems of heat, light and household mechanics—will be freed from all labor through beneficent wireless power.” —Quoted from “When Woman Is Boss,” an interview with Nikola Tesla by John B. Kennedy, 1926

“We shall be able to witness and hear events—the inauguration of a President, the playing of a world series game, the havoc of an earthquake or the terror of a battle—just as though we were present.” —Quoted from “When Woman Is Boss,” an interview with Nikola Tesla by John B. Kennedy, 1926

In 1935, Tesla predicted the formation of the United States’ Environmental Protection Agency (EPA), correctly assuming that issues such as pollution and sustainability would become important enough to warrant their own branch of government.

“Hygiene, physical culture will be recognized branches of education and government. The Secretary of Hygiene or Physical Culture will be far more important in the cabinet of the President of the United States who holds office in the year 2035 than the Secretary of War. The pollution of our beaches such as exists today around New York City will seem as unthinkable to our children and grandchildren as life without plumbing seems to us. Our water supply will be far more carefully supervised, and only a lunatic will drink unsterilized water.” —Quoted from A Machine to End War, by Nikola Tesla and George Sylvester Viereck, 1937

It’s unlikely that the EPA has been as important as the State Department to past and present Commanders in Chief. Yet it goes without saying that environmental issues remain a global concern. Tesla was right in his prediction that future generations would be more mindful of the environment.

As mentioned, the interview that provided us with some of the above predictions is called “When Woman Is Boss”. No doubt an eye-catching title at the time of its publication (and perhaps just as attention grabbing in the present), it was derived from one of Tesla’s predictions— namely, that gender inequality would eventually be overcome.

On this topic, Tesla said:

“Through countless generations, from the very beginning, the social subservience of women resulted naturally in the partial atrophy or at least the hereditary suspension of mental qualities which we now know the female sex to be endowed with no less than men. But the female mind has demonstrated a capacity for all the mental acquirements and achievements of men, and as generations ensue that capacity will be expanded; the average woman will be as well educated as the average man, and then better educated, for the dormant faculties of her brain will be stimulated to an activity that will be all the more intense and powerful because of centuries of repose. Women will ignore precedent and startle civilization with their progress.” —Quoted from “When Woman Is Boss,” an interview with Nikola Tesla by John B. Kennedy, 1926