Best futurists ever: HG Wells’ spot-on predictions will make you think he really did time travel 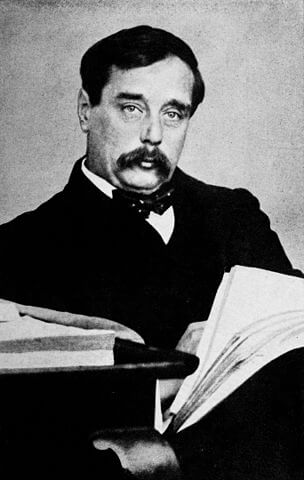 Visionary author H.G. Wells did more than write influential works of science fiction like the famous novella The Time Machine. He also played a significant role in forming the current field of futures studies.

Various texts credit him with first using the word “foresight” to both describe and call for the creation of the discipline. Speaking on BBC radio in 1932, Wells addressed the need to examine possible “future consequences of new inventions and new devices.” He juxtaposed the immense academic study of the past with the utter lack of inquiry into the years ahead, adding “there is not a single Professor of Foresight in the world.” Yet today there are several based around the globe.

Not only is Wells known as the father of science fiction, but perhaps he should be heralded as a father of futurology as well. The moniker seems even more well-deserved when further examining the prescience in his literature.

Here we examine some of his most jaw-dropping predictions found in his writings, many of which focus on war and lethal weaponry.

More than a dozen years before tanks were first used on battlefields, Wells described similar armored fighting vehicles called ironclads in the 1903 story The Land of the Ironclads:

“They were essentially long, narrow, and very strong steel frameworks carrying the engines, and borne upon eight pairs of big pedrail wheels, each about ten feet in diameter, each a driving wheel and set upon long axles free to swivel round a common axis. This arrangement gave them the maximum of adaptability to the contours of the ground. They crawled level along the ground with one foot high upon a hillock and another deep in a depression, and they could hold themselves erect and steady sideways upon even a steep hillside. The engineers directed the engines under the command of the captain, who had look-out points at small ports all round the upper edge of the adjustable skirt of twelve-inch iron-plating which protected the whole affair, and could also raise or depress a conning-tower set about the portholes through the center of the iron top cover. The riflemen each occupied a small cabin of peculiar construction and these cabins were slung along the sides of and before and behind the great main framework, in a manner suggestive of the slinging of the seats of an Irish jaunting-car. Their rifles, however, were very different pieces of apparatus from the simple mechanisms in the hands of their adversaries.”

Four years before the Italians first used them in war, and nine years before their widespread use during World World 1, Wells foresaw the deadly use of powered aircrafts against enemy nations.

Written in 1907, the military science-fiction novel The War in the Air depicts a global war with frighteningly close similarities to the real one that would begin in 1914.

The following excerpt comes from a German character planning an aerial strike on the United States:

“War is perhaps already declared. We go–to America. Our fleet will descend out of ze air upon ze United States–it is a country quite unprepared for war eferywhere–eferywhere. Zey have always relied on ze Atlantic. And their navy. We have selected a certain point–it is at present ze secret of our commanders–which we shall seize, and zen we shall establish a depot–a sort of inland Gibraltar. It will be–what will it be?–an eagle’s nest. Zere our airships will gazzer and repair, and thence they will fly to and fro ofer ze United States, terrorising cities, dominating Washington, levying what is necessary, until ze terms we dictate are accepted. You follow me?”

Theodore Maiman invented the laser in 1960. Yet Wells envisioned them more than 60 years earlier in the famed 1898 novel The War of the Worlds. In the book, Martians brandishing Heat Rays, which are weapons that can obliterate humans in a silent flash:

“In some way they are able to generate an intense heat in a chamber of practically absolute non-conductivity. This intense heat they project in a parallel beam against any object they choose, by means of a polished parabolic mirror of unknown composition, much as the parabolic mirror of a lighthouse projects a beam of light… it is certain that a beam of heat is the essence of the matter. Heat, and invisible, instead of visible, light. Whatever is combustible flashes into flame at its touch, lead runs like water, it softens iron, cracks and melts glass, and when it falls upon water, incontinently that explodes into steam.”

Too bad humanity didn’t take stronger heed of Wells’s 1914 book The World Set Free, published nearly 30 years before The Manhattan Project. Or maybe they did and that is the problem. In the novel, Wells details the use of nuclear weapons, namely the atomic bomb, the inflict unimaginable destruction:

“Never before in the history of warfare had there been a continuing explosive; indeed, up to the middle of the twentieth century the only explosives known were combustibles whose explosiveness was due entirely to their instantaneousness; and these atomic bombs which science burst upon the world that night were strange even to the men who used them.”

On a lighter note, Wells also revealed foresight regarding wireless communication methods. In the 1923 novel Men Like Gods, he describes technologies that sound similar to voicemail and email:

“For in Utopia, except by previous arrangement, people do not talk together on the telephone. A message is sent to the station of the district in which the recipient is known to be, and there it waits until he chooses to tap his accumulated messages. And any that one wishes to repeat can be repeated. Then he talks back to the senders and dispatches any other messages he wishes. The transmission is wireless.”

Similar to Google Home and other voice-activated virtual assistants like Alexa that can also read you the news, the General Intelligence Machine carried out a similar function in the 1899 novel When the Sleeper Wakes.

“This was the General Intelligence Machine. For a space it seemed to be gathering breath, and a regular throbbing from its cylindrical body was audible. Then it trumpeted ‘Galloop, Galloop,’ and broke out again.

‘Paris is now pacified. All resistance is over. Galloop! The black police hold every position of importance in the city. They fought with great bravery, singing songs written in praise of their ancestors by the poet Kipling. Once or twice they got out of hand, and tortured and mutilated wounded and captured insurgents, men and women. Moral — don’t go rebelling. Haha! Galloop, Galloop! They are lively fellows. Lively brave fellows. Let this be a lesson to the disorderly banderlog of this city. Yah! Banderlog! Filth of the earth! Galloop, Galloop!’

Almost 70 years before the Apollo 11 moon landing in 1969, Wells’ characters traveled to the planetary satellite via the Cavorite Sphere anti-gravity spaceship in the 1901 story The First Men in the Moon:

“What is this spirit in man that urges him forever to depart from happiness and security, to toil, to place himself in danger, even to risk a reasonable certainty of death? It dawned upon me up there in the moon as a thing I ought always to have known, that man is not made simply to go about being safe and comfortable and well fed and amused. Against his interest, against his happiness he is constantly being driven to do unreasonable things. Some force not himself impels him and go he must.”

In the unsettling 1896 novel The Island of Dr. Moreau, Wells painted a world in which an arguably mad scientist performs vivisection experiments on animals. Slowing transforming and augmenting the creatures to take on human attributes, Wells’ writing reveals parallels to early practices of genetic engineering and cloning.

“It is not simply the outward form of an animal which I can change. The physiology, the chemical rhythm of the creature, may also be made to undergo an enduring modification,—of which vaccination and other methods of inoculation with living or dead matter are examples that will, no doubt, be familiar to you.” – Dr. Moreau speaking in The Island of Dr. Moreau

Wells made several other stunning predictions. However, these alone give the feeling that he didn’t just popularize the concept of time travel—he could have skipped through time himself.