Best Futurists Ever: The uncanny foresight of Alvin and Heidi Toffler from prosumers to same sex marriage 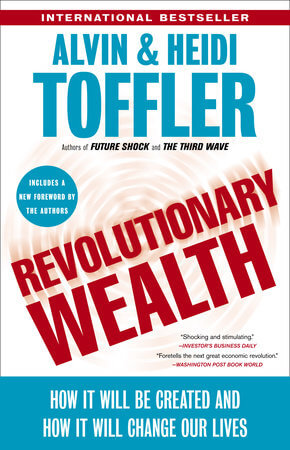 With the passing of renowned futurist Heidi Toffler on the 6th of February this year, we lost one of the last great futurists of the 20th century. It therefore seems timely to reflect on the brilliant nature of Heidi’s work with husband and fellow futurist Alvin. In a time before the internet, IVF, or mass consumerism, the dynamic husband-wife duo Toffler’s saw it coming.

“They set the standard by which all subsequent futurists have been measured,” wrote Michael Krantz for Time in 1970. Indeed, their uncanny ability to identify some of this century’s greatest social and technological trends is yet to be matched. The lesser-known Heidi was never formally named as co-author of the couple’s first three books – but was widely referred to as Alvin’s ‘writing partner’, and was acknowledged as co-author of their later works together.

Three books cemented the Toffler’s fame: Future Shock (1970), The Third Wave (1980), and Powershift (1990). A decade apart, the books forecast some of the key pillars of modern history. From cloning to personal computers, virtual reality, terrorism, and even the breakdown of the nuclear family, the Toffler’s ability to sense the future was marred only by a few abstract ideas such as underwater cities and space colonies. But, never say never…

Here are some of the Toffler’s most successful predictions.

The term prosumption is a hybrid term of ‘consumer’ and ‘producer’, and was first coined in The Third Wave in 1980. Simply put, it refers to the growing input of the consumer’s wants and needs into the design of products. The rookie becomes the expert as mass customization gives the customer access to increasingly expert products. We only need to look to the rise of DIY as a megatrend, one that saw so many experts go out of business.

Toffler uses medical instruments as an example in The Third Wave.

As recently as 1972 few medical instruments were sold to non physicians. Today a growing share of the instrument market is destined for the home, he writes.

Sales of otoscopes, ear-cleaning devices, nose and throat irrigators, and specialized convalescent products are all booming, as individuals take on more responsibility for their own health, reduce the number of visits to the doctor, and cut short their hospital stays.

The Tofflers also predicted the spread of online shared spaces such as chat rooms, interactive media, and electronics devices that remind the user of events and appointments.

The technology that eventually became the internet was also described as, “advanced technology and information systems [that] make it possible for much of the work of society to be done at home via computer-telecommunications hook-ups.”

In other words – email.

In a 1997 interview with Wired, the Tofflers spoke extensively of the future need and desire for human cloning.

The pull, the demand for human organs and for human clones will build once it becomes clear that this is doable. The race is probably already on, said Alvin, whilst wife Heidi was more pragmatic.

Society has still not dealt with the ethical and legal problems involved with cloning, she said. What are we waiting for?

In another interview, Toffler looked to the future of IVF, predicting a setup in which women would be able to “buy a tiny embryo, take it to her doctor, have it implanted in her uterus…and then give birth as though it had been conceived in her own body”.

One of the more fantastic possibilities is that man will be able to make biological carbon copies of himself, he said.

In The Third Wave, the Tofflers wrote, “We shall… also see many more ‘family’ units consisting of a single unmarried adult and one or more children. Nor will all of these adults be women… As homosexuality becomes more socially acceptable, we may even begin to find families based on homosexual marriage.”

It seems remarkable that decades after this being published, same sex marriage remains taboo – if not illegal – in many parts of the world.

The Toffler’s also predicted the growing incidence of older parents, thanks to a heavier focus on career building in the 20’s and 30’s.

Why not wait and buy your embryos later, after your work career is over? Thus childlessness is likely to spread among young and middle-aged couples; sexagenarians who raise infants may be far more common.

IVF and egg freezing would have seemed a wild concept at the time, and is perhaps the most prescient of all the Toffler’s predictions.

As Marie Kondo continues to highlight the groaning cupboards and wardrobes of the world, the Toffler’s words of ‘overchoice’ ring true.

People of the future may suffer not from an absence of choice but from a paralysing surfeit of it, wrote the Tofflers. They may turn out to be victims of that peculiarly super-industrial dilemma: overchoice.

The concept of surplus ‘screen time’ and its ill effects have become a growing concern in recent years. The Tofflers saw this, making famous the phrase ‘information overload’ in Future Shock.

They described the condition of ‘future shock’ as the “dizzying disorientation brought on by the premature arrival of the future”.

In a radio interview following the release of the book in 1970, Alvin Toffler looked to a sense of rising panic as new technology continued to march forth, seemingly unstoppable.

I think there’s a tremendous undercurrent of dissatisfaction in America; people saying I want out, it’s moving too fast, it’s moving away from me; a sense of panic; a sense that things are slipping out of control and I don’t think that there’s much we can do in our personal lives to counteract that, he said.

Sound familiar? With many young urban couples looking to return to organic lifestyles and rural ‘seachanges’, the rejection of modern media and technology are surely paid in part to fear of the future. Wearable tech, social media, endless online entertainment, multiple communication channels…it’s an exhausting present we live in, so what does the future hold? Relief, or increased cadence?

Perhaps the most sage advice from the Tofflers, however, is less of a prediction and more of a warning.