Of the many issues when engaging on social media, one of the most central is how much to post.

If you don’t post enough, you’re barely visible. If you post too much, you annoy people who are likely to unfollow you, and you make any individual post far less likely to be seen or acted on.

Last week I was the host for #crowdchat, my first ever Twitter chat. I had avoided doing Twitter chats before, as it would deluge my followers with tweets. However I decided to do it, both to support Crowdsourcing Week, which I am on the advisory board for, and also as an experiment. No-one objected, but clearly only a small minority of my followers were engaged in the conversation.

My average number of tweets is 8.8 per day, with a lot of fluctuation during the week and depending on my travel and work schedule. I don’t count my tweets and I don’t aim for any particular number, I just tweet what I think is worth tweeting, and my number of tweets ends up being pretty consistent month to month.

In my Twitter profile I state my aspiration to be a “contributor to the global brain”. To my mind this means that what I share should add value to others, mainly by pointing to interesting, relevant, and insightful content, and sometimes share of myself for those connected to me. This means that I must be an active curator, with a reasonably high threshold on value or interest for me to share a link across the wealth of content I see each day.

Some analysts have tried to answer the question of how much is the right amount to tweet.

Dan Zarrella of Hubspot has suggested 22 tweets per day is the optimum, based on the observation that those who tweet 10-50 times per day have more followers on average, with a peak around 22. However the causality here is of course highly dubious, with the number of tweets per se not likely to have attracted followers, and those with more followers more likely to want to tap their audience.

A more persuasive methodology is used by Adobe’s social media practice, which suggests 4-5 tweets per day, based on this generating the highest retweet rate. 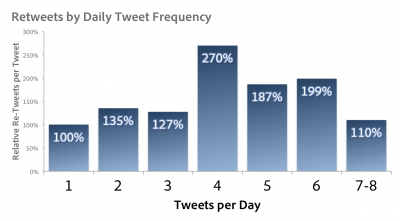 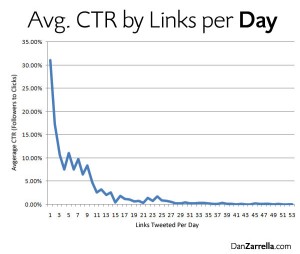 Below is a small selection of prominent social media participants and their average tweets per day, according to How Often Do You Tweet. The fact that many of them tweet a lot is not a good indicator for most others. They can get away with high tweet frequency because their followers are often deeply interested and feel they have something to offer, but it means that action on any individual tweet is limited.

In the end it is of course a matter of choice and style. There are no rights and wrongs. But if you tweet too much there’s a good chance I’ll take you out of my lists.

Strategic overview of AHT Group: sharing our ventures, projects, and enable... The power of social media and future organizations
Scroll to top
This website or its third-party tools use cookies to improve user experience and track affiliate sales. To learn more about why we need to use cookies, please refer to the Privacy Policy.